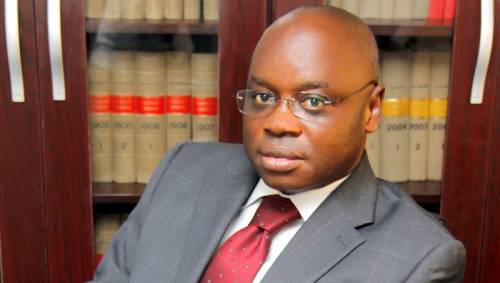 Justice Raliat Adebiyi of Lagos High Court bowed to pressure from senior lawyers and sentenced, lawyer, Joseph Nwobike (SAN) to just one month imprisonment for bribery and attempting to pervert the course of justice.

Nwobike was found guilty and sentenced to one month in prison for attempting to pervert the course of Justice, an offence which carries a penalty of two years imprisonment.

Nwobike was charged on a 18-count charge on offering gratification to a public official, perverting the course of justice and giving false statements to an official of the EFCC.

The lawyer was found not guilty on seventeen count charges and was discharged and acquitted but was however found guilty of a one count charge of attempting to pervert the course of justice.

Counsel to Nwobike had earlier argued that the accused is a first-time offender that has never breached the law. He further said that until now, he is a Senior member of the bar who has conducted himself appropriately. He urged Justice Adebiyi to give a custodial sentence.

In pronouncing her one month judgment, Justice Raliat said that this would deter others from following this same line.

He added that it would also teach the public in letting them know that no one is above the law.

She also acknowledged the fact that the face of law profession would be saved.

The counsel to EFCC, Rotimi Oyedepo commenting on the judgment said that they are satisfied with the judgment and that the commission would look into the case to know if they are going to appeal or not.