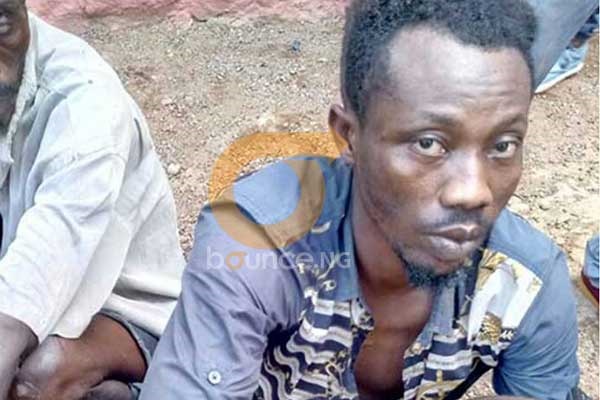 They were both members of rival cult groups, and as a result, became enemies of each other.

They had attacked each other on many occasions, taking the lives of their members.

Finally, one of them had to go down, and the other faced the wrath of the law over it.

27-year old suspected cultist, Kayode Oreneye, is now in the net of the Ogun State police command for allegedly killing one Shakiru, a member of a rival cult group.

Kayode did not only kill Shakiru, he also severed his two hands and sold the palms for a sum of 5,000 naira to a herbalist.

Oreneye, a member of Aiye cult group, was arrested for allegedly killing a member of the rival Eye confraternity in Ilaro.

He was paraded alongside 47 other suspected criminals who were arrested for offences ranging from armed robbery, murder, and theft.

Oreneye was arrested by operatives of the Federal Special Anti-Robbery Squard (FSARS) at a drinking joint at Oke Ilewo in Abeokuta.

Oreneye, speaking with newsmen when he was paraded at the command headquarters, Eleweran, Abeokuta, said he killed Shakiru, popularly known as ‘School Boy’, because his (Shakiru) group had killed four members of his own cult group

“It is true that I shot and killed Shakiru because he had killed three members of our (Aiye) cult group.

“Again, he had made attempts on my life on three occasions, but I was able to escape, and I had to strike before he would strike.”

Recovered from the cult group were one pump action gun, one cut-to-size locally made pistol, five live cartridges and assorted charms.

Oreneye will be taken to court to determine his fate.

Ajaokuta Steel Factory Gears Up to Start Production. After 40 Years