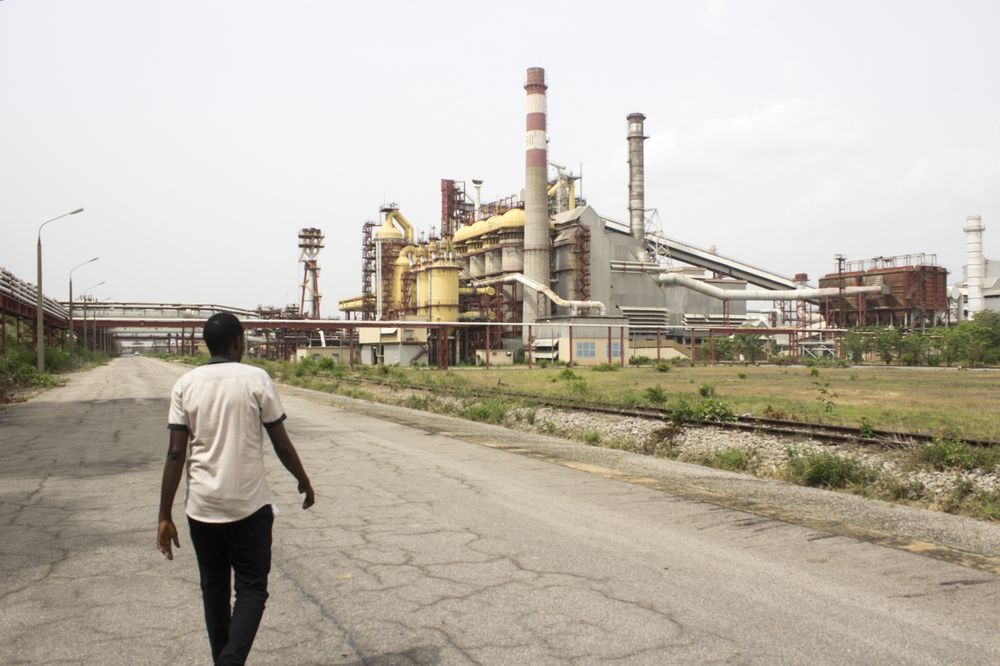 On a hot April morning, workers are furiously cleaning a decorative fountain in front of the executive office of Nigeria’s largest steel complex. An onsite power plant is being repaired by electricians. Others around the 39-year-old facility are clearing brush. In the middle of it all, administrator Abdul-Akaba Sumaila is meeting in turn with the 20 or so people crowding his waiting room, a mix of union officials, local politicians and job applicants.

When one young man pulls a filled-out form from a wrinkled envelope, Sumaila asks him about his background, pats his back and encourages him to stay positive. Soon, he says, Ajaokuta Steel will start hiring. After that, it may actually make some steel

The dilapidated factory complex has never managed to produce a single bar, coil or rod. Built with Soviet assistance, the sprawling facility has sucked up $8 billion in public investment and been hamstrung by repeated stops and starts, ownership changes, poor governance and sheer incompetence. It’s a tortured history that mirrors Nigeria’s broader attempts to develop a sustainable economic base beyond fossil fuels.

President Muhammadu Buhari has put a high priority on getting the plant into production, hopefully by selling it to private investors. But the legal, technical and political problems illustrate in microcosm—albeit a three-square-mile microcosm—many of the challenges that bedevil Nigeria’s diversification drive.

Sumaila, a mechanical engineer who’s taken a three-year leave of absence from Royal Dutch Shell Plc to try to revive Ajaokuta, is undeterred. “What excites me is the enormous potential of this place,” he said in his office at the plant. “Whatever we need to do, we have to do it.”

The economic imperatives are clear. Nigeria depends on crude for 90 percent of its export earnings. With global oil prices significantly below their past highs of more than $100 a barrel, shortages of foreign exchange are a daily reality. And Nigeria, Africa’s largest oil producer, has little domestic capacity to refine gasoline and thus must pay to re-import its own oil. The consequent lack of foreign currency has driven up prices for everything from food to construction materials, further hobbling an economy that shrank by 1.6 percent in 2016.

The need for diversification, and the employment it could provide, is made more urgent by a surging population. With about 200 million people and growing rapidly, Nigeria is by far the most populous country in Africa. Without durable sources of employment, a nation that’s spent much of the past decade fighting insurgencies in its arid north could descend further into disorder.

Yet the record of privatization in Nigeria is decidedly mixed. In the cement industry, it was largely a success: Investors succeeded in reviving production, making the country a net exporter of the material. One of the early buyers, Aliko Dangote, is now Africa’s richest man. By contrast, efforts to sell off power plants have failed to end blackouts, still a daily occurrence in much of Nigeria.

Steel has long been an obvious target. Nigeria has vast deposits of iron ore, much of it in Kogi State, the same region where Ajaokuta is located.  Transformed into steel, the ore could make other domestic industries, such as construction, far more viable.

Those intentions underpinned the construction of Ajaokuta, which when it began in 1979 was envisioned at Pharaonic scale. At full capacity, it was intended to produce as much as 3 million metric tons of steel annually, enough to largely close the gap between Nigeria’s current steel consumption and domestic output. Yet the most critical piece of infrastructure, a rail line that would connect the plant to iron-ore mines and deliver the finished product, was never completed.

Today much of the facility beyond the central administration block resembles the set for a post-apocalyptic action film. The blast furnace, conveyor belts and giant cranes to move materials—many inscribed with the words “Made in USSR”—stand idle in scrubby fields. Pipes as wide as manhole covers are coated in creeping grass, and cattle graze in clearings meant to store coal for the furnace.

Of the 10,000 houses envisioned for workers, the 4,000 that were completed are occupied mostly by retirees. The current workforce of about 1,500 civil servants is tasked primarily with keeping parts of the plant in serviceable condition. The combined 120 kilometers (75 miles) of internal roads and railroads, as well as the school, the library, and the hospital for workers and their families, are largely unused. The runway of an airstrip built to serve the area needs to be resurfaced.

Nigeria’s government says it’s serious about transforming Ajaokuta from an embarrassment into a viable asset. The plant’s biggest booster is Kayode Fayemi, the mines and steel development minister. While Fayemi concedes, with significant understatement, that the first 30-plus years of Ajaokuta “didn’t quite work out as planned, which is the Nigerian story sometimes,” he said fixing it is now a national priority.

“Ajaokuta is central to our diversification strategy,” he said in his office in Abuja. Building up domestic steelmaking, he said, is “the least we could do for ourselves as a country and for our manufacturing sector.”

“This is an alternative to oil”

Work has begun on the long-awaited rail spur line, which may accept test trains as soon as August. The government also will need to decide who should own and operate the plant. Ajaokuta is currently controlled by the state after a previous private-sector operator, Global Steel Holdings Ltd., had its concession terminated.

While the government has said it plans to solicit bids for Ajaokuta from new investors, a group of lawmakers, with some union support, is pushing to keep the plant under public ownership. They argue that only paltry offers are likely for a facility that still requires huge investment. Senate Majority Leader Ahmad Lawan proposed legislation to that effect in the upper house on May 8, against the government’s wishes.

Fayemi says he’s convinced that Nigeria can no longer afford not to process its own resources. “The idea that we must be taking our iron ore out, our gold out, every raw material, for others to add value, and then send back to us to pay probably 10 times what it’s worth when we send them out is unthinkable,” he said.

He won’t be around to see if that pans out. He said May 14 that he will leave at the end of the month to run for governor in his home state of Ekiti. And Sumaila, the Ajaokuta administrator, said he doesn’t know whether he will return to Shell or not when his term at Ajaokuta ends in October 2020.

Wearing moccasins, a black short-sleeved and collarless suit, with a pen in hand, Sumaila says he remains optimistic as he walks around his spacious office.

“This is an alternative to oil,” he said. “The complex can be up and running two years after the government makes the strategic decision on the direction it wants to take.”

Charlyboy speaks on marriage, abusive men, his daughter, others