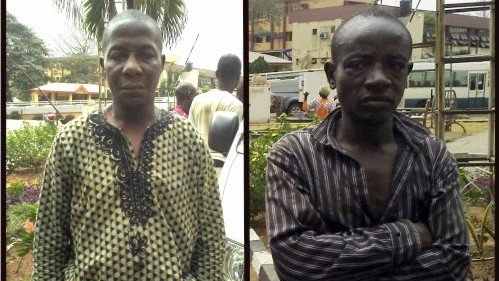 A suspected drug addict arrested by the Rapid Response Squad of the Lagos State Command has disclosed that he made over N300, 000 monthly from begging in Ikeja.

Kehinde Olatubosun, 56, from Ibadan, Oyo State, was arrested on Saturday night along with 18 other drug addicts at a joint in Ipodo, Ikeja.

A team of Rapid Response Squad Decoy had on Monday night traced a stolen phone to the joint, leading to the arrest of a three-man gang mobile phone thieves, three hard drug peddlers and 13 drug addicts, the police said in a statement on Sunday.

Mr. Olatubosun stated that he made over N10, 000 daily begging at the Mobolaji Bank Anthony Roundabout; beside the Lagos State University Teaching Hospital; Toyin Street; and Opebi.

“All days of the week, I’m always in Mobolaji Bank Anthony Roundabout, Toyin Street roundabout and Opebi. At times, I collaborate with beggars. Whatever we make, we share but I get a larger share,” said the suspect.

“What I do is that, I get LASUTH drug prescription papers. I get it from their waste bin. With this in my hand, I convince motorists, passengers and passersby that I have a relative who is in dire need of money to buy drugs and I show them the prescription papers.

“This is what I have been doing since I was deported from Germany in 2004. Before the deportation, I was working as Electrical Engineer in Bauhusa, Colon, Germany. I was in Germany for 12 years before I was deported.”

Mr. Olatubosun? said his deportation from Germany was after he was caught in possession of hard drugs.

“I have four children. Two are in Germany with my wife. One is in Texas, United States and another in Nigeria,” he said.

“Unfortunately, all the money I make from this begging goes into drugs. Day after day, I am always there, seven days a week. I make more money on Fridays, Saturdays and Sundays. I make more than N10,000:00 on weekends.

“As I speak to you, I’m not on drugs but I am experiencing withdrawal symptoms, that is, the effect of not taking drugs for sometimes.”

The suspect said he was at the Ipodo drug joint when the RRS operatives raided the place and added that it was the first time he would be arrested.
“I am praying that RRS release me. I promise I won’t go back to drug again. Where I live presently was given to me by my in-law.”

Another drug suspect, Dada Ajayi, arrested at the drug joint during the police raid, said that addiction had destroyed his life.

“?I am trying to get over it now; drug has been the cause of my stagnation in life,” said Mr. Ajayi, 48, who said he had been hooked on drugs for over 17 years.

“?I frequent that joint because I have nowhere to go. I have lived the better part of my life consuming drugs.

“As I talk to you, the remains of my wife is in Ikeja mortuary. She was taken to Lagos State University Teaching Hospital, Ikeja. I was asked to bring N150,000 for surgery but I didn’t have N50,000 on me then. She died in the process.

“Right now, I have lost my family because of my drug addiction. I don’t know where my children are or how to start my life again. I can’t stop going to that drug joint because it is the only place where I get consolation. It is the only place I’m at peace with myself.

“If anybody want to help us, they should arrest the drug barons or dealers. Arresting us won’t solve drug problem because without the sellers there won’t be the takers.

“You arrest the dealers, I mean the merchants, then, you have cut the supply and thus saved us from getting drugs. Without that, we would always find our ways there whenever we are released.”