Members of the Public Accounts Committees in the 7th Senate and House of Representatives, statutorily responsible for ensuring probity and accountability in the nation’s financial system, compromised the Money Laundering Act during their tenure, documents in the possession of PREMIUM TIMES have shown.

Members of the committee as well as their representatives, repeatedly withdrew sums totalling about N226m, in violation of the money laundering law.

It also said, “Any Financial Institution or Designated-Financial Institution that fails to comply with the above provision by making the appropriate compliance report to the regulatory authorities commits an offence and is liable on conviction to a fine of not less than N250,000:00 (Two Hundred and Fifty Thousand Naira) for an individual and not more than N1,000,000 (One Million Naira) for a body corporate, for each day that the contravention continues unabated.”

The two committees however ignored the provisions even though their members participated fully in the enactment of the law.

Others are Domingo Obende, Nwagu Igwe and Barata Ahmed.

There were 41 other members of the committee.

The documents, which this newspaper obtained exclusively, showed that the two panels engaged in banking transactions totalling N2.90 billion in two accounts – 0022999033 and 0022999040 – domiciled in the Guarantee Trust Bank, some of which breached the provisions of the Act.

Altogether, members of the committees made 139 withdrawals totalling N1.45 billion from the two accounts.

Several of the withdrawals were made in gross violation of the nation’s money laundering law.

For instance on March 30, 2012, one D.E Abdullahi, believed to be an official of one of the committees and apparently acting on the instructions of the leadership of the committee, withdrew a little over N5m from Account number 0022999033 domiciled in Area 3, Garki, Abuja, branch of GTB in violation of the Act.

According to the documents, that day, he withdrew N1.79m, N2.5m and N1.44m in three different transactions totalling N5.73m. 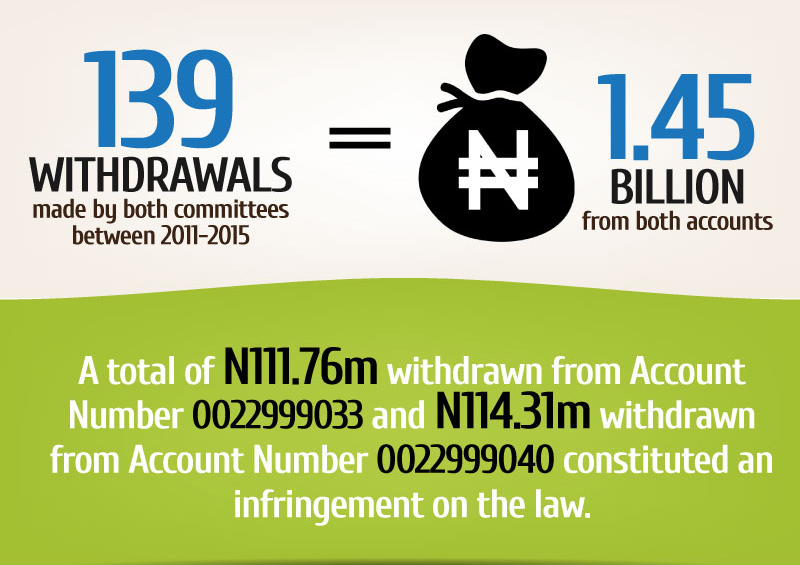 Mr. Adeola, the then House Committee chairman, on July 12, 2012, made three cash withdrawals totalling over N10m from this account. He withdrew N3m, N4.00m and N3m,min violation of the law.

On November 7, Mr. Adeola further violated the money laundering law when he withdrew N6.76m cash from the account.

In 2013, the violation continued unabated.

On February 13, 2013, for instance, three cash withdrawals were made from the account although the names of the beneficiaries were not listed.

The documents also indicate that Mr. Lawan, unlike Mr. Adeola, only personally withdrew cash once from the bank. The senator, who failed in his bid to be elected President of the 8th Senate last June 9, personally collected N50,000 on April 4, 2013. The transaction did not violate the law.

Efforts to reach Mr. Lawan were not successful as multiple calls to his telephone did not connect.

When PREMIUM TIMES contacted Mr. Adeola via telephone last Thursday, he said it was not his place to understand how individual committee members operated their bank accounts.

A text message was then sent to him explaining that the accounts in question were that of the committee and not individual members account, but he did not respond.

The Public Accounts Committee, PAC, headed by opposition members in both chambers, is responsible for monitoring accountability and transparency in the conduct of government business.

It is the only committee of the National Assembly mentioned by the 1999 Constitution.

Section 85 (5) of the constitution states that ‘The Auditor-General shall, within ninety days of receipt of the Accountant-General’s financial statement, submit his reports under this section to each House of the National Assembly and each House shall cause the reports to be considered by a committee of the house of the National Assembly responsible for public accounts.”

The Senate Standing Order listed the committee’s responsibilities to include:

– (a) to examine the accounts showing the appropriation of the sums granted by the Senate to meet the public expenditure; together with the Auditor’s report thereon. The Committee shall, for the purposes of discharging that duty, have power to send for any person, papers and records, to report from time to time to the Senate and to sit notwithstanding the adjournment of the Senate;

(b) the Committee shall have power to examine any accounts or report of statutory Corporations and Boards after they have been laid on the table for the Senate and to report thereon from time to time to the Senate and to sit notwithstanding the adjournment of the Senate; and

(c) the Committee shall have power to enquire the report of the Auditor-General of the Federation with respect to any prepayment audit query which had been overruled by the Chief Executive of the Ministry, Extra-Ministerial Departments or Agency of the Federal Government and Courts of the Federation and to report same to the Senate.