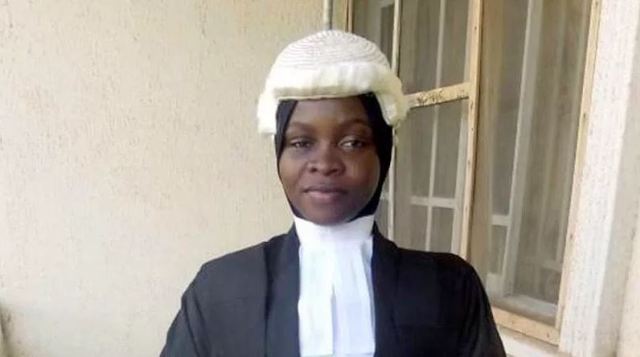 Abdulsalam Amasa, the father of Firdaus Amosa, a University of Ilorin Law graduate who was denied induction by the Nigerian Law School has called on relevant authorities to do the needful by calling her daughter to bar.

According to Amosa, Firdaus has broken no law, adding that he does not regret the action of his daughter.
Speaking further, he said he was looking forward to the day his two daughters who are presently Law undergraduate will repeat similar action if the statusquo remains.

This is the second time the Amosa family will be making headlines on the issue of Hijjab in the country.
Firdaus’ mother was earlier in the limelight when she led other Muslim nurses to successfully fight for the use of Hijab in the Kwara State School of Nursing, Ilorin.

Speaking with our reporter at his Oloje Estate residence, Amosa said the family in conjunction with other stakeholders and organisations have written appeal letters to relevant quarters on the issue.

“I have no regrets whatsoever and in fact my two daughters studying law at the University of Ilorin will repeat the action if they find themselves in the same situation.

“She has been very much apprehensive of what she was going to meet. But it was only by divine grace she was able to scale through the challenges and pressure from unexpected quarters during her stay.

“She is someone that doesn’t have time for glamorous activities and would have preferred not to attend the ceremony but for her certificate.

“Right from childhood, she was not used to uncovering her hair and she told those pleading with her to succumb during the ceremony that the way she dressed was the least she could compromise on the Hijab.

“I know what she did was in conformity with the dictates of Allah. I was told about the incident on phone because I didn’t go. And that was why I was very happy because if I had gone with her mother, maybe the glamour of the ceremony would have forced us to tell her to remove her Hijab against Allah’s will.”

Meanwhile, plans for Firdaus to study for her Masters and Doctorate degrees abroad have been concluded.
The Chief Imam of Agaka Mosque, Asa Dam, Ilorin, Alhaji Yusuf Murtador, made this known during his Friday sermon.

According to him, some concerned Muslims who have been following events have paid for Fridaus’ further studies abroad adding that despite the persecution during her programme, Allah has always stand by the Law graduate and used her as a shining example.

“Allah has a way of rewarding those that stand for His cause even if people were against them. Some good Muslims have come up to stand with Firdaus Amosa and have paid for her Masters and PhD programmes abroad.

“When CMO invited her at the Emir’s palace, she revealed that her lecturers in law school usually drove her out of the class because of her Hijab but she excelled in exams by reading the notes of her schoolmates.

“It is very unfortunate that Muslims who are ignorant of Islamic issues are castigating her on this matter which was a Qur’anic injunction from Allah, explicitly stated in the holy book.”

Recall that Firdaus, an indigene of Ilorin, the Kwara State capital was not called to Bar by the Nigerian Law School for her insistence on wearing Hijab during induction ceremony in Abuja on December 13, 2017.

The issue has attracted national and international attention with top personalities and Muslim organisations expressing solidarity in support of Fridaus.

Last week, the Kwara State chapter of the Conference of Muslim Organisations (CMO) in a press conference led by former Grand Kadi of Kwara State Sharia Court of Appeal, Justice Idris Haroon (retd) condemned the decision of the Law School.