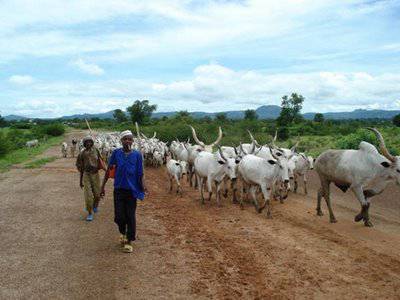 The Yoruba people on Kogi State under the aegis of the Okun Development Association (ODA) have rejected the proposal to establish cattle colonies for Fulani herdsmen in any part of their six local government areas.
Rising from a well attended emergency national congress in Kabba at the weekend, the Okun people said the idea of opening cattle colonies as disclosed by Agriculture and Rural Development Minister, Chief Audi Ogbeh was repulsive and repugnant to equity, fairness and natural justice.
The Okun people who are in Kabba-Bunu, Ijumu, Lokoja, Yagba West, Yagba East and Mopamuro Local Government Areas of the state said any proposal to appropriate their land for the promotion of the private business interests of Fulani herdsmen would deny them their right to their ancestral land and would amount to an avoidable time bomb.
In a communique issued at the end of the congress, the ODA said the cattle colony concept was a disservice to the people’s past, present and future and was as such unacceptable.
Described in whatever way, the document said the cattle colony was distasteful, dangerous and with a huge potential to snowball into a major national disaster.
The state government, last week, announced that it had embraced the new policy and volunteered to pioneer the model.
Governor Yahaya Bello also invited the Fulani who may be facing difficulties elsewhere in the country to feel free to relocate to the state with a directive to the different levels of administration in the state to accommodate them and issue certificates of indigeneship to those among them who want it.
However, the ODA in the communique signed by its National President, Chief Femi Mokikan and the National Secretary, Mr. Ayo Abereoran rejected the state government’s position which it said was not in the best interest of the Okun people.
It said cattle rearing was a private business and that the nation’s statutes had adequate provisions guiding the way owners should conduct their businesses.
The cattle colonies, it added, were a thinly veiled way of subsidizing the private businesses of herdsmen.
The ODA said most of the herdsmen in Okunland had at will and usually unprovoked, launched attacks on their hosts adding that the situation arose because of the general belief that they were emboldened by the tacit support they seemed to enjoy in certain official quarters.
As a result of such continued threats, it said Okun farmers had almost abandoned farming for fear of attacks by herdsmen.
Noting that the herdsmen crisis was real and could not be wished away, the association recalled that there were in the past ranches in Kabba, Mokwa (Niger State) and Akunnu in today’s Ondo State, the ODA advised government to take steps to revive such facilities and encourage herdsmen to set up similar ones for their use.
Such ranches it said, would reduce tension between the herdsmen and farmers, encourage the establishment of allied industries to produce cattle feeds and promote the application of modern technology.
The ODA also enjoined the state government to, in future, take into consideration, the long term overall interests of the people above other interests in its decisions and actions.