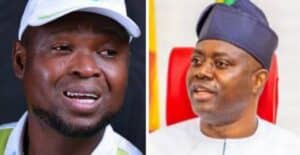 A stalwart of the All Progressives Congress (APC) in Oyo State, Engineer Oyedele Hakeem Alao, has berated Governor Seyi Makinde of the state for vowing that there would be no hiding place for members of the party, who looted the state’s funds.

Alao in a statement issued in Ibadan by his Media Office, said that the governor was playing to the gallery with the statement, adding that his administration is the worst in the history of the state with high scale looting and that he has plundered the state into huge debts.

Governor Makinde, while featuring on a radio program in Ibadan, had said that his administration is after APC members in the state, vowing to retrieve every kobo of the state resources they stole.

But Alao in the statement, said that the governor is living in a glass house and throwing stones, saying that since the governor came on board in 2019 the second name of his administration is corruption with many sleazes that have not been heard before in the state happening under his watch.

According to him, it was under his administration that the state Accountant-General was arrested by the Economic and Financial Crimes Commission (EFCC) for corruption for the first time, stating that the revelation by Dataphyte on the award of contract for school notebooks at N998m with each copy of 60 leaves costing N2,100 was the highest peak of corruption in his government.

The politician, the Asiwaju of Iroko, added that Governor Makinde takes delight in fooling the people with his holier than though attitude, asking why it was taking him close to three years to run after the so-called looters of the state resources.

He stated further that the governor should name the APC members that he claimed were involved in the looting of the state resources, insisting that Governor Makinde is known more for speaking with both sides of the mouth with most of the promises he made to the people of the state unfulfilled.

He said, “It is now glaring to every right-thinking person in the state that Governor Makinde is running a government of deceit by raising an alarm of looting to de-market the APC, while his administration is the worst in the history of the state with massive looting of the state resources under the guise of phantom projects.

“If indeed the governor is sincere with his latest claim, there are many questions which the people of the state would want him to provide answers to. Why did it take him so long to tag the APC as party of looters? how come that it is now that he has declared interest to contest for a second term that he is accusing the opposition party of corruption? Ehy is it becoming difficult for his administration to reveal the debt profile of the state under his watch?”

Alao maintained that Governor Makinde should pack his prison clothes ready immediately after the expiration of his tenure in 2023 because of the alleged atrocities he has committed and is still committing, stating that he would definitely be the first governor in the state to be jailed ‘korokoro’ for corruption.