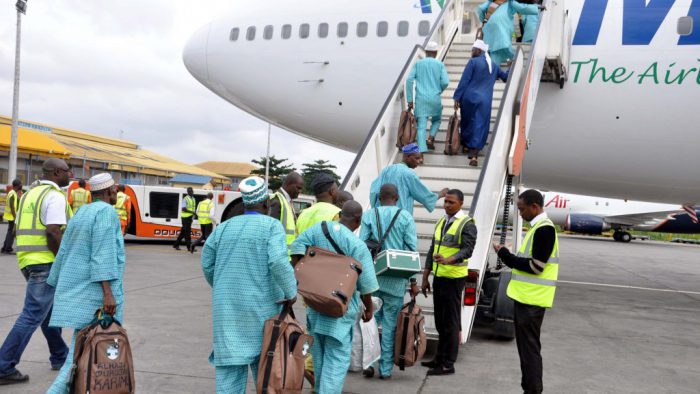 The first batch of this year’s Hajj pilgrims from Nigeria will leave for Saudi Arabia today, Saturday.

The National Hajj Commission of Nigeria (NAHCON) has said that it is set for the inaugural flight signaling the commencement of 2018 Hajj operations.

This is coming one week after Saudi Arabia began its Hajj season.

NAHCON spokesperson, Fatima Usara, in a statement Friday said the flag-off is scheduled to take place on Saturday at the Domestic Wing of the Nnamdi Azikwe International Airport, Abuja at 11:00 a.m.

She said pilgrims from Kogi State and officials are expected to be on the inaugural flight to be flown on MAX Air directly to Madina.

“NAHCON is also pleased to inform the general public that the biometric data registration is progressing steadily.

“State Muslim Welfare Boards in conjunction with biometric data capturing officials have been doing commendably well in this regard,” Mrs Usara said.

She also said as at July 19, statistics shows that biometrics data of 17, 000 (seventeen thousand) intending pilgrim have been captured while over five thousand visas have been processed.

“Pilgrims are once again reminded that the registration is availed free of charge courtesy of Saudi Arabia’s generosity.

“Therefore, any intending pilgrim that paid for the registration hitherto is urged to return to his/her registration center for a refund,” she said.

She also advised other intending pilgrims to be patient and wait for their turn to be invited for the biometric registration before they present themselves at the centres.

She said this is important to maintain orderliness, prevent stress and to follow the arrangements on ground to accommodate a specific number of people at a time.

She assured everyone will be captured before the end of the exercise.

“Intending pilgrims are also advised to note, for avoidance of speculations and distrust, that there are other biometric data capturing candidates that are not pilgrims but are legitimately traveling to Saudi Arabia for their different purposes.

“Therefore, the handlers alternate between different categories of biometric applicants, vis-a-vis pilgrims from licensed tour operators, travelers on tourism, as well as those applying for work and study visas to Saudi Arabia; everyone visits the same biometric centers for data capturing. Hence everyone is enjoined to exhibit the spirit of tolerance,” she said.