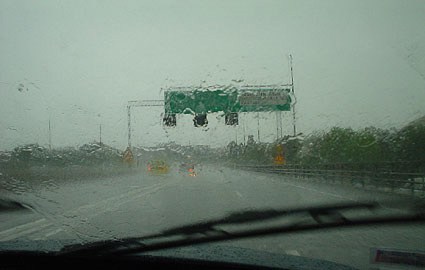 Hailstones fell on Friday evening in the Gudu District of the Federal Capital Tertiary.
?
The News Agency of Nigeria (NAN) reports that some residents in the area were seen gathering the hailstones to have a clear view of what they look like. ?

Some excited residents of Gaduwa Estate, Gudu District, who came out to witness the falling of the hailstones, which they described as strange, told NAN that it was a blessing to witness the occurrence.

Chidinma Okoro said this was the first time she had ever seen hailstones ? and was very excited.
?

“I have only heard and read about? it but this is my first time of experiencing it live.

“We just started hearing something hitting the roof very hard and we all ran to the balcony just to see things like ice blocks falling down.

“I am really excited.”

Another resident, Theresa John, said she was awakened by the sound of the hailstones on the roof and was excited seeing them fall from the sky.

“I have seen hailstones before but this is my first experience in Abuja?. It was quite exciting.

“My children’s Nanny ran out to gather some because she has never seen them before and she was dumbfounded. “?

The Nanny, Rejoice Gawan, expressed excitement, saying she has never seen anything like this before.
?
NAN reports that hail comprises of balls of irregular lumps of ice called hailstones. It usually falls in cold weather.

The Wikipedia online dictionary says, Hail is a form of solid precipitation distinct from ice pellets, though the two are often confused. It consists of balls or irregular lumps of ice, each of which is called a hailstones.

They are formed when drops of water freeze together in the cold upper regions of thunderstorm clouds.