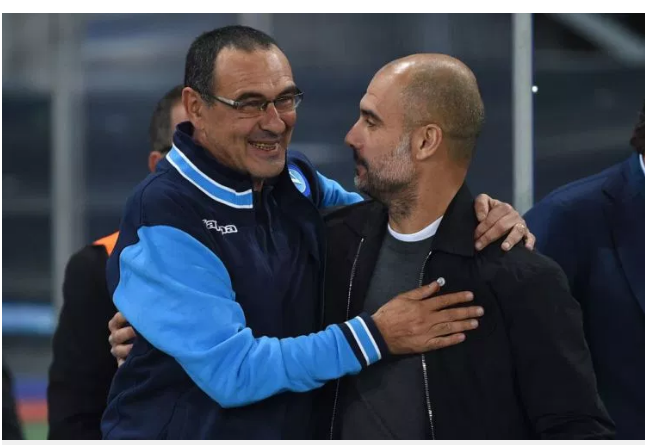 Manchester City manager, Pep Guardiola, has stated that former Napoli manager, Maurizio Sarri would be a welcome addition to the Premier League if he joins Chelsea.

Sarri has reportedly agreed to a deal in principle with Chelsea, who appear poised to part company with current coach, Antonio Conte.

Guardiola played against Sarri during last season’s Champions League and although Manchester City won both matches against Napoli, the former Barcelona boss was impressed with the Serie A side’s style of football.

The Spanish gaffer told reporters, “If he [Sarri] comes to England, it would be a pleasure.

“For somebody like me, who loves watching games at home on the sofa, Napoli are spectacular and his brand of football is a joy to watch.

“Often a coach is judged on wins, but you’ve also got to look at the shape as well as the substance – Sarri had Empoli and Napoli playing great football, and he did a fantastic job.”

Sarri is yet to win a major trophy in his coaching career but Guardiola said the incoming Chelsea boss was unfortunate to be competing against such a dominant Juventus side.

He added, “Well, football’s about details. Maybe if Juve had not won 2-1 at Inter, they would not have won the Scudetto.

“The Bianconeri certainly shine when it comes to assuredness in their game and they have solid club foundations which makes everything easier.

“Many coaches, like me, have had the fortune of having great players and being at great clubs which help you to win, but when it comes to judging a coach, you’ve got to see how his team plays.

“Seven titles in a row shows the strength of [Juventus]. Often, people tend to take it all for granted, but what Juve have done is incredible and often understated.

“Furthermore, this year they’ve won against one of the best teams in the world in Napoli, and that gives even more value to their results.”

Ronaldo beats Bale to Champions League Goal of the Season