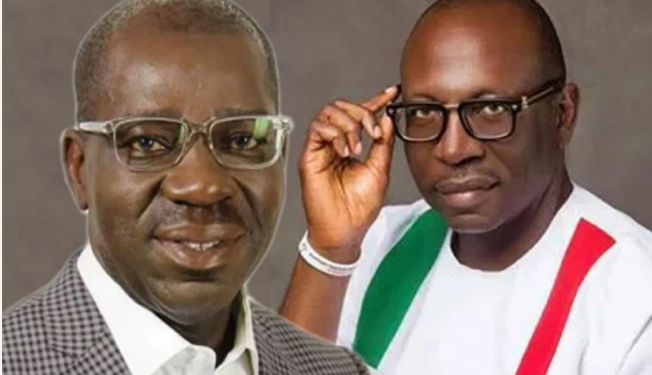 Recall that the court had on Tuesday admitted Obaseki’s nomination form into evidence. The nomination form, which enabled him to participate in September 19, 2020, governorship election was tendered by the Independent National Electoral Commission (INEC).

At the resumed hearing on Wednesday, an Associate Professor in the Department of Economics, University of Lagos, Emmanuel Balogun, appeared as the third principal witness (PW-3) in the case.

The witness tendered the original copy of his own degree certificate in Agricultural Economics, which was awarded to him on July 6, 1979, by the University of Ibadan. Obaseki had said he obtained a Bachelor of Arts degree in Classics from the same university in the same year.

On whether the governor’s certificate was forged, Balogun said he could not comment on it because he had not seen the certificate before.

Under cross-examination, the PW-3, told the court that he got admission into the University of Ibadan in 1975 through prelim.

Balogun noted that he would be surprised that “somebody can get admission into the University of Ibadan as at then with only three O’level results or two A level results with a minimum of 2 HSC papers.”

“As at 1976, there were different entry requirements for prelim and direct entry students,” the witness said.

“As at then, admission requirements varied from one faculty to the other. The basic requirement for admission was 5 credits, including Maths and English, but anyone coming in through direct entry must have made the 5 credits and then choose two subjects in HSC.

“Generally, a certificate is signed by the Vice-Chancellor and the Registrar, with a date on it. Generally, all certificates issued by University of Ibadan are coloured with a coloured logo on it.
“The certificate is usually larger than the normal A4 papers.”

He stated that if any attempt is made to compress and photocopy a certificate in an A4 paper, some parts of the certificate would be left out and would no longer be a reflection of the original certificate.

The witness said he was subpoenaed by the plaintiffs on December 23 to produce the original copy of his degree certificate before the court.

The presiding judge, Justice Ahmed Mohammed, admitted his certificate into evidence and marked it as Exhibit PL-4.
After the original certificate was admitted into evidence, counsel to the plaintiffs, Akin Olujimi, SAN, applied to substitute it with the photocopy, arguing that the original document is very valuable and irreplaceable.

But Obaseki’s counsel, Ken Mozia, and that of the People’s Democratic Party (PDP), Razaq Isenalohme, opposed the request, insisting they would make use of the exhibit in the course of the hearing.

After the PW-3 completed his testimony and was discharged by the court, the plaintiffs produced a retired Assistant Superintendent of Police and a forensic document examiner, Mr. Raphael Onwuzuligbo, as their next witness.
Onwuzuligbo said he was in court on the strength of a subpoena that was also issued on him.

The subpoena was tendered into evidence and marked as Exhibit PL-5.

The defendants resisted an attempt by counsel to the plaintiffs to tender a document that contained report of investigation that was conducted by the witness.

The defendants argued that the document was neither pleaded nor in the court’s file, insisting that it did not qualify to be admitted as evidence in the case.

They noted that the document was made on November 16, during the pendency of the suit.
They further argued that the plaintiffs failed to establish the relevance of the document to the case.

The defendants, therefore, urged the court to reject the document.

Responding, the plaintiffs’ counsel urged the court to dismiss the objections and argued that a document that is needed to prove a fact does not need to be pleaded.

Olujimi said the report touched on Obaseki’s certificate that is in issue.

The report was admitted in evidence as Exhibit PL-6. However, the court held that it would consider objections against its admissibility in the final judgement.

Justice Mohammed, thereafter, adjourned the case till Thursday to enable the defendants to cross-examine the witness.

They alleged that the governor forged the University of Ibadan degree certificate he submitted to INEC in aid of his qualification for the election.

The plaintiffs equally alleged that there were discrepancies in the subjects that Obaseki claimed he passed in his West African Examination Council (WAEC) exam and subjects in his testimonial.

Consequently, they are praying the court to declare that his claim in his INEC form EC9 at column C, sworn to on June 29, 2020 at the Federal Capital Territory High Court Registry to the effect that he obtained from the University of Ibadan in 1979, a Bachelor of Arts Degree in Classical Studies, is false and contrary to Section 31 (5) and (6) of the Electoral Act, 2010.

Also, they are seeking an order declaring that Obaseki lied on oath when he swore to an affidavit on June 29, 2020 that he worked in Afrinvest Limited from 1994 to 2014 when he retired.

We have reasons to be thankful, says Tinubu