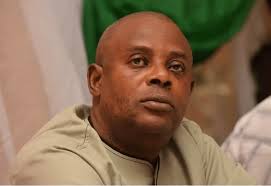 Back then, when I newly established a lasting relationship with an ex-military leader, I paid him a schedule meeting and during our chats one of the issues I confronted him with was how it was “this easy” for him to have participated in almost all the major coups in the country. He smiled and said “are you now calling me a perennial coup plotter,” I said “no,” but he obviously understood what I meant.

One of the things he said on a lighter note was this, “when you hear that some officers are gathering for what looks like a military putch, you first take a look at the leader, we know those that even if their names are mentioned, you can just continue with your drink, we also have the category of those, who will never let you sleep with both eyes closed.

On Tuesday, when news broke that a group loyal to the National Leader of the ruling All Progressives Congress (APC), Asiwaju Bola Ahmed Tinubu has pulled the rug and the table of the Governor of Lagos State, Mr. Akinwunmi Ambode, another of his boys shook to the point that the Governor might even be impeached just to stop him from coasting to victory next year.  I sent words out to know how bad the situation was.

Some people said it was bad, but that it was not beyond redemption, that I should be calm.

Later, the video of the so-called landlords of Lagos surfaced with a character, whose name is still confounding me, introducing the “incoming governor.” I took a good look at the leader of the group, behold it was Cardinal James Odunmbaku. I took a deep breath and smiled, the worst is over, Odunmbaku is the leader, I can close my eyes and even snore, why?

The game didn’t start today, the man has always seen himself as a major factor, who must always be appeased. Ask, James Abiodun Faleke. He suffered same fate with the governor at the local government level.

James Abiodun Faleke’s political life started from Kaduna Polytechnic. Before he finished his Higher National Diploma programme, he was operating from Akiode Area in Ojodu Berger. He got introduced to James Odunmbaku, a popular shepherd of a Celestial Church in his neighbourhood, who eventually became his political godfather.

Faleke nurtured him to the best of his means and he also rose because in addition to the influence of the Cardinal, he became a great personality.

He worked and became very close to Asiwaju Bola Ahmed Tinubu, he earned so much respect and admiration that Tinubu adopted him as a son.

Back at his base, Cardinal Odunmbaku became jealous and envious,  not that he wasn’t getting even more than his fair share of the till, he suddenly saw Faleke as an enemy that must be conquered.

Just like he is currently doing, he single-handedly decided to effect a change of administration in Ojodu Local Government, where Faleke was calling the shot as the chairman.

He sent words to his boy, Faleke not to bother going to the council again as a new man would be resuming work and reporting to him from the next day. A confused Faleke pleaded and  asked for forgiveness, but all fell on deaf ears as Odunmbaku stood his ground.

A few minutes into midnight, Faleke drove all alone to the house of Asiwaju Bola Tinubu in Bourdillon, Ikoyi, Lagos. Of course, he needed no formal invitation to see the leader, who was still holding court in one of the sitting rooms.

He waited awhile, as soon as he sighted Tinubu seeing off a guest, he went down on his belly and asked him if he had offended him unknowingly.

It was a surprised Asiwaju that asked him what the matter was, Faleke narrated his ordeal, it was there and then Asiwaju Tinubu took his phone, put a call through to Odunmbaku aka Baba Eto, the message was clear, as Tinubu, aka Jagaban was in no mood for long friendly discussion.

Tinubu there and then instructed that “there must be no trouble in the council tomorrow when Faleke gets to the office.”

Odunmbaku quickly got the impulse of the message and said “yes sir.”

That was how Faleke had a roller coaster ride back to office and simply put Odunmbaku where he belonged, behind him.

So, the latest story in town might suffer the same fate and it would not be a surprise that Governor Akinwunmi Ambode of Lagos State would not be denied a second term of office unlike the rumours that are spreading like a whirlwind all over the metropolitan city of Lagos.

Bsc, HND Dichotomy: How Access Bank Is Killing The Dreams of Young Graduates

Fayose writes EFCC, reveals when he will report for questioning