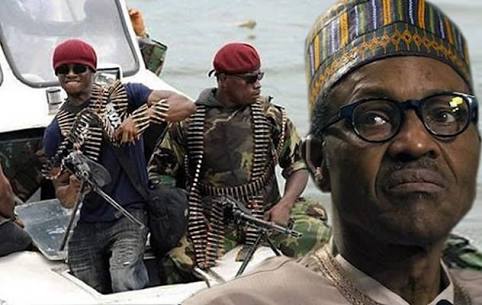 Ex-militants from the Niger Delta region, yesterday, asked President Muhammadu Buhari to resist the temptation of renewing the expired licences of all oil firms and other highly-placed individuals operating in the area.

They urged the President to instead, redistribute the oil wells among the 36 states of the federation and the Federal Capital Territory, FCT, saying that the mineral resources though explored from the Niger Delta belonged to the Nigerian people.

Reacting to reports on the renewal of the expired oil licences, the ex-militants under the aegis of “Coalition of Niger Delta Agitators,” in a letter to the President, said that the sharing of the oil blocks among the states was the only panacea to enduring peace in the region.

Signed by General John Duku, Convener of the Coalition of Niger Delta Agitators, General Ekpo Ekpo for Niger Delta Volunteers, General Osarolor Nedam for Niger Delta Warriors among others, the letter added that the process and procedure for bidding of oil blocks should henceforth be thrown open to the general public.

The letter read in parts: “The general assembly of the coalition resolved as follows the president and commander in chief of the armed forces, should reject all application for renewal of Oil Prospecting Licences, OPL, Oil Mining Licences, OML, from the companies affected as listed below and many other ones that also seek renewal.

“We therefore, demand that OPL and OML of all the companies mentioned above and others yet to mention be withdrawn and the renewing processes/procedures should be stopped with immediate effect for the interest of peace in the Niger Delta and Nigerian at large.

“The oil blocks should rather be re-distributed among the 36 states of the Federation including the Federal Capital Territory, Abuja and other Nigerians who have not benefited or own oil block before.

“It is a clear case of injustice for some few individual to hold Nigerian oil wells and enrich themselves and their families at the expense and detriment of others. Our believe that the oil found in the Niger Delta is for all Nigerians and the benefits derived from such God given treasure should be for all and not for particular family.

“We also wish to draw the attention of the government that the owners of these oil blocks today are the problem and the crises in the Niger Delta today, majority of them divert the funds meant for community development to their private use, stealing crude oil through barges conniving with NNPC officials after which they paid some youths to vandalize pipelines to cover up their stealing.

“The process and procedure for bidding of oil blocs should henceforth be thrown open to general public.

“We believe that you will use your good office to provide justice, equity and fairness on this matter, the oil bloc should not be inheritance of a particular person or family.

“We shall resist any further attempt to entrust our oil blocs to these companies, who do not care about the wellbeing of the Niger Delta people and Nigeria at large. Most of them don’t have operational office in the region; neither do they care to provide basic amenities to the oil producing communities.”

Keyamo reveals what to expect in 2019 election