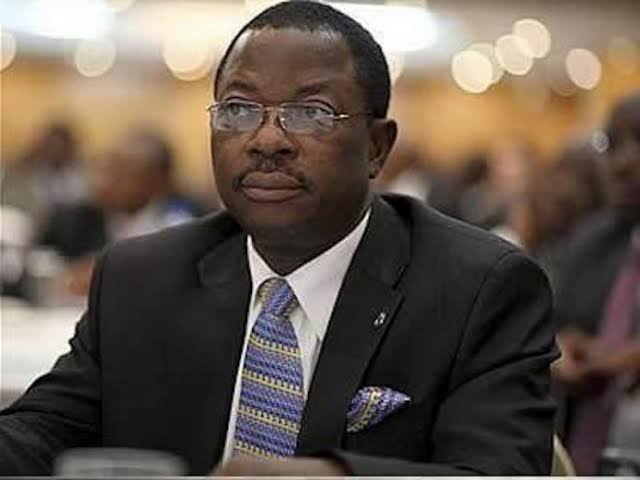 Akingbola was charged by the EFCC with an amended 22-count charge bordering on money laundering, before a Federal High Court in Lagos.

He was re-arraigned in March, and pleaded not guilty to the charge.

The prosecution had called Jimoh, who during his evidence-in-chief, testified as to some transactions conducted in the defunct Intercontinental Bank during Akingbola’s tenure.

Under cross-examination on Thursday, the witness told the court that the demand in a company’s (Tropics Securities) letter dated May 8, 2009, was internally processed by Intercontinental Bank.

When shown an exhibit labelled appendix I, the witness confirmed the document as one of those used in the processing.

Olanipekun then asked the witness if payments were at the time made to Tropics Securities and if any person queried the payments.

The witness replied that as the chief investigating officer, he queried the transaction.

He added that the management of the bank, under the then leadership of Mr Lai Alabi, also queried the transaction.

When asked if the transaction was done under the management of Alabi and if his investigation covered the tenure of Alabi, he said,”No”.

Olanipekun asked, “What was Alabi before he became interim managing director of Intercontinental Bank?

Olanipekun also asked, “You know of the loans he ( Alabi) wrote off as direct inspector?”

Before the witness could respond to the question, the prosecutor, Mr Rotimi Jacobs (SAN), raised an objection on the grounds that the question was not relevant to the trial.

But defence counsel insisted that since the witness volunteered the name of Alabi, he would “take him up” on the testimony.

The court overruled the objection and Olanipekun continued his cross-examination.

Olanipekun asked the witness, “Are you a stock broker or have you traded in shares of any stock broking firm?”

The witness replied in the negative.

When asked when Intercontinental Bank became public quoted, the witness replied that it was not material to his investigation.

On whether he knows anything about stock broking firms, the witness replied that he only knew that they bought and sold shares,

“So, you don’t know anything about Intercontinental Bank buying shares on behalf of its customers?” Olanipekun asked.

The witness replied, “I don’t know”.

Olanipekun then asked the witness if he invited a stock broker to direct him since it appeared he did know much about it.

The witness testified that there were other people working with him.

The witness, however, agreed with the suggestion by Olanipekun that shares of a public quoted company cannot not be sold or bought except through a stock broker.

When asked if he recalled that in his evidence before an Ikeja High Court on April 29, 2010, he had testified that ICML had repaid its loan, the witness replied, “I don’t think so”.

The document containing the witness’s testimony in Ikeja was then tendered in court, and was admitted and marked Exhibit O.

When the witness was asked to read out a paragraph in the document, he read out the portion, confirming his testimony that the loan had been repaid.

When asked if he recalled that he had also told the Ikeja High Court that he had an MBA result from University of Ilorin, and whether he was awarded an MBA degree by the university, he said, “I did not collect the certificate”.

Olanipekun asked, “Did your name feature in the convocation list of graduating students?”

The witness replied, “I did not go for the graduation?”

“Do you have an MBA certificate?” Olanipekun also asked.

The witness replied in the negative.

Trial will continue on Friday.

The EFCC had accused the defendant of converting an aggregate sum of 1.3 million dollars and 8.5 million dollars, taken from the bank’s GBP NOSTRO account at Deutsche Bank in London.

The sum was said to have been remitted into the account of Fuglers Solicitors with the Royal Bank of Scotland in London, to purchase property in the name of Life Boat Settlement Trust allegedly set up by the defendant.

According to the prosecution, the defendant knew that the sums represented proceeds of crime.

The alleged offences contravene the provisions of Sections 105(1) and 105(a), of the Investment and Securities Act, 2007.

One of the offences also contravenes the provisions of Sections 14(1) of the Money Laundering Prohibition Act, 2004.