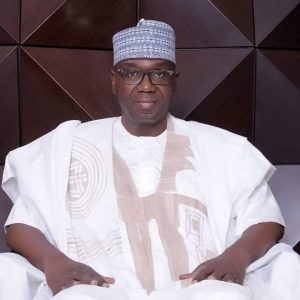 The Governor-elect made the announcement in a statement issued in Ilorin, the state capital, on Wednesday by his media spokesman Rafiu Ajakaye.

The Chairman of the 80-member Transition Committee is Aminu Adisa Logun, an alumnus of the Prestigious National Institute for Policy and Strategic Studies(NIPPS), Kuru. Chief James Bamisaiye Ayeni is Deputy Chairman, while a one-time Permanent Secretary and former Clerk, Kwara State House of Assembly, Hon. Muhammad Razaq Umar, will serve as Secretary.
Other members of the Committee include the APC Chairman in the State, Hon. Bashir Bolarinwa; the three Senatorial District Party Chairmen; former Governorship aspirants or representatives; party chieftains and elders.

Also included in the committee are representatives of youth, women, labour, experts and professionals in different fields of human endeavour, including retired military and security officers.

The broad representation reflected in the selection of the committee members demonstrates the avowed commitment of the Governor-elect to fulfil his promise of an all-inclusive government under the new APC administration in the State.

The composition of the TC also took into account best practices in a number of states, where a holistic change of leadership occurred, AbdulRazaq added.

The committee is also mandated to come up with policy recommendations for the incoming administration.

He expressed great optimism on the capacity of the committee members to deliver on their assignment, given their pedigree, track record, competence and evident public testimonials on their integrity, patriotism, and passion to serve the state.

AbdulRazaq charged the committee members to be sensitive to the high expectation of the electorate and the general public to experience the desired positive change in leadership while appealing to the masses to support the committee with relevant information and memoranda where necessary. The Transition Committee will be inaugurated on Thursday, 4th April 2019 at Arca Santa Event Hall, Ajase Ipo road, Ilorin at 9 a.m.

Erastus Akingbola’s Money Laundering: Blow by Blow Account Of What Happened In Court