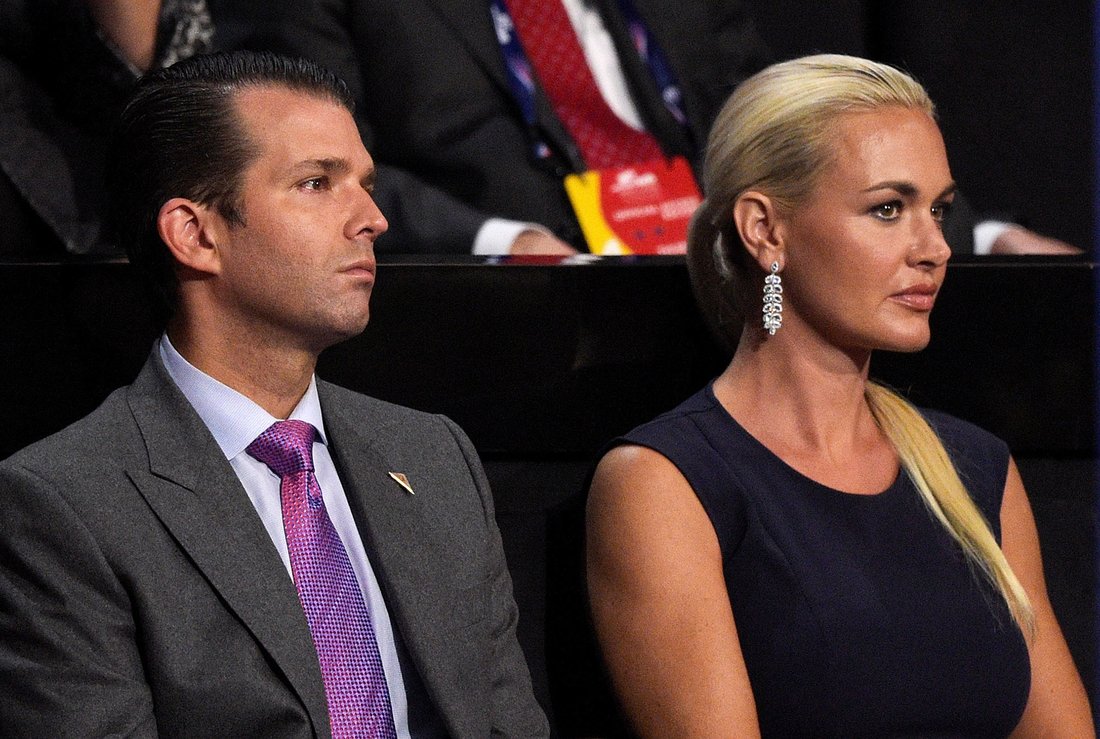 Donald Trump Jr. and wife Vanessa are splitting after more than 12 years of marriage.

“After 12 years of marriage, we have decided to go our separate ways. We will always have tremendous respect for each other and our families,” Trump Jr. and Vanessa said in a statement obtained by PEOPLE. “We have five beautiful children together and they remain our top priority. We ask for your privacy during this time.”

It has  been confirmed that Vanessa filed the documents late Thursday in Manhattan Supreme Court, according to court records. Page Six, who first reported the news, said she filed for an uncontested proceeding.

The filing comes after a day of speculation that the couple was headed for divorce, according to an earlier Page Six report from Wednesday.

The pair, who share five children together, wed on Nov. 12, 2005, at his father’s Mar-a-Lago estate in Palm Beach, Florida — the same spot where President Donald Trump married third wife Melania in January of that same year.

A source who sometimes socializes with the couple told PEOPLE just prior to the filling: “I heard for a while they have been living separate lives… Even before all this Trump presidency stuff started they weren’t good and their marriage was strained.”

But another source close to the Trump family tells PEOPLE of the split, “This is surprising news. They always seemed very cute together, and were a really fun couple.”

News of the split comes a month after former model Vanessa, 40, was hospitalized after the family received a suspicious letter containing a white, powdery substance that police later found to be nontoxic.

Trump Jr., 40, later confirmed that his wife was “unharmed.”

“Thankful that Vanessa & my children are safe and unharmed after the incredibly scary situation that occurred this morning,” President Trump’s oldest son tweeted. “Truly disgusting that certain individuals choose to express their opposing views with such disturbing behavior.”

The New York Post broke the news of the split on Wednesday, reporting that the couple have been leading separate lives.

The Daily Mail reported last month that the couple didn’t spend Valentine’s Day together, opting instead to treat their children to separate dinners. Vanessa took her two oldest sons, Donald III, 9, and Tristan, 6, to a “low-key sushi restaurant” in upper Manhattan, while her husband took oldest daughter Kai, 10, on a date. Their youngest children, Chloe, 3, and Spencer, 5, apparently stayed at home for the holiday.

The source close to the Trump family notes that Vanessa is “crazy about her kids, and she prides herself on being an incredibly hands-on mom. She may not even have a nanny.”

The family has been living on Manhattan’s Upper East Side while Trump Jr. took over managing the Trump Organization with younger brother Eric after their father was elected president. On the weekends, Trump Jr. and his family often retreated to their home in upstate Roscoe, New York, known as Trout Town, USA, where locals say he’s known to indulge in two of his favorite hobbies: hunting and fly-fishing.

“He’s good people, he’s family,” the manager of the Riverside Café, a Roscoe restaurant, told PEOPLE last summer. “He comes in wearing his Columbia shirt and a cap and settles in with his kids and wife and they all enjoy a meal together.”

Donald Trump introduced his son to future wife Vanessa Hayden at a fashion show in 2003.

“I’m at this fashion show,” Vanessa told The New York Times in 2006. “Donald Trump comes up to me with his son: ‘Hi, I’m Donald Trump. I wanted to introduce you to my son Donald Trump Jr.’ ”

The pair were introduced again six weeks later by a mutual friend at a birthday party at a New York restaurant, where they ended up hitting it off. “We talked for an hour,” Vanessa recalled. Although the two initially didn’t remember each other from their first meeting, Vanessa says she recalled blurting at one point, Wait, you’re “the one with the retarded dad!”

Donald Trump Jr. and Vanessa Trump at their 2005 wedding

Long outshone by his sister — first at the Trump Organization and now in the White House, where she and her husband, Jared Kushner, have West Wing offices and White House titles — Trump Jr. has reportedly had a harder time adapting to life after the election.

Over the summer, he found himself at the center of a firestorm after it was revealed that he took a meeting at Trump Tower in June 2016 with a Russian lawyer promising dirt on his father’s Democratic rival, Hillary Clinton.

Trump Jr. made matters worse for himself when he tweeted screen shots of the email chain, exposing his glee (“I love it”) over the prospect of learning damaging information about Clinton. Hours later, Trump Jr. went on Fox News’ Hannity and said, “In retrospect, I probably would have done things a little differently.”

According to recent reports from The New York Times and the Los Angeles Times, special counsel Robert Mueller’s probe is still intensely focused on figuring out what happened during the meeting, as well as investigating President Trump’s claim that the discussion was about American adoptions of Russian children.

A friend of the Trump brothers told PEOPLE at the time that Trump Jr. and brother Eric Trump hate their role as First Sons: “They never wanted this.”

Added a source in their circle: “Don can’t do any deals, because he’ll be overly scrutinized. He just goes to work every day and is miserable.”

Despite his reported unhappiness, Don. Jr has continued to support his father, often lashing out at his critics on Twitter. Most recently, he campaigned for Republican congressional candidate Rick Saccone in Pennsylvania on Monday, where he dodged questions about his father and the Russia investigation, according to Business Insider.