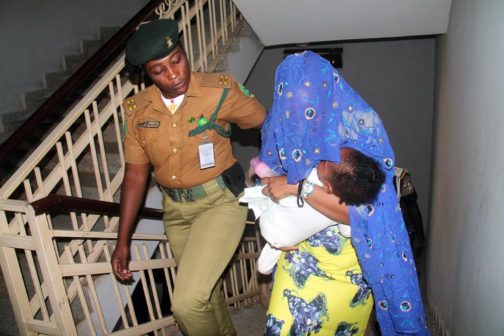 The court sentenced her to death by hanging.

Sanda stood trial on a two-count charge of culpable homicide.

Bello, nephew of Haliru Mohammed Bello, a former national chairman of the Peoples Democratic Party (PDP), was killed in November, 2017.

Sanda was said to have stabbed her husband over alleged infidelity. Though she claimed Bello died when he fell on a broken piece of ‘shisha’ pot during an argument.

Delivering judgment on Monday, Yusuf Halilu, the judge, said after putting Sanda’s testimony alongside that of two witnesses he raised a question as to whether the shisha pot broke before or after the demise of Bello.

“Was the shisha pot broken before or after his death? Why didn’t PW 1 and PW 4 mention a broken pot,” Yusuf said.

“The broken shisha pot and scattered living room is stage-managed and an affront (on the court). I am convinced that it was after the death of Bilyaminu.”

The judge said Sanda “woefully failed” to explain the cause of death of her husband going by the doctrine of “last seen”.

“She should reap what she has sown, for it has been said that ‘thou shall not kill’ and whoever kills in cold blood deserves death as his own reward,” the judge said.

“Convict also clearly deserves to die, accordingly I hereby sentence Maryam Sanda to death by hanging until she dies.”