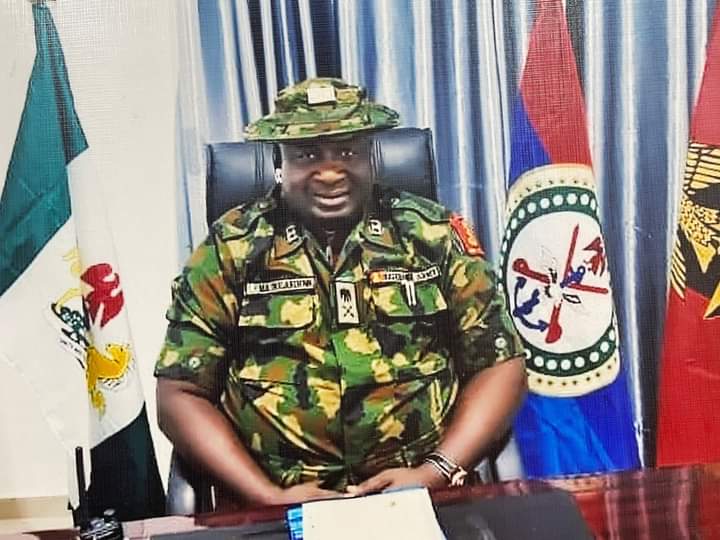 The trial of one Bolarinwa Abiodun, a self-professed Army General on a 13-count charge bordering on obtaining money by false pretence, forgery of documents, and possession of documents containing false pretence involving an alleged N266,500,000 fraud continued on April 25, 2022 before Justice Oluwatoyin Taiwo of a Special Offences Court sitting in Ikeja, Lagos with the trial judge dismissing his bail application.

One of the counts reads: “Bolarinwa Oluwasegun Abiodun, between 15th June, 2020 and 31st December 2020 in Lagos, within the jurisdiction of this Honourable Court, with intent to defraud and whilst holding yourself out as a General in the Nigerian Army, obtained the sum of N111,400,000 from Kodef Clearing Resources Limited, under the pretence that the sum represented part of the amount expended to “press and process” your incoming appointment by the President and Commander-in-Chief of the Armed Forces, as the CHIEF OF ARMY STAFF of the Nigerian Army, which pretence you knew to be false.”

Another count reads: “Bolarinwa Oluwasegun Abiodun, sometime in May 2020 in Lagos within the jurisdiction of this Honourable Court, knowingly forged LETTER OF APPOINTMENT AS CHIEF OF ARMY STAFF dated 20th May 2020 and purported the said document to have emanated from the President of the Federal Republic of Nigeria, which document you know to be false.”

He pleaded “not guilty” to the charges.

Justice Taiwo on April 14, 2022 heard his bail application, which was moved by his counsel, Kayode Lawal.

He had argued that “the law provides that all accused persons are presumed innocent until found guilty,” and urged the Court to admit his client to bail “pending the hearing and determination of this case and for such other order.”

Counsel for the EFCC, Rotimi Oyedepo, however, vehemently opposed the bail application.

In his argument, Oyedepo noted that: “this is a situation that warrants your lordship to exercise Judicial discretion against the accused.”

Adopting the written address of the prosecution, Oyedepo urged the Court to refuse the application for bail, arguing that “notwithstanding the purpose of the deposition in our two affidavits, there is no single reply from the applicant.”

Citing the case of Uket versus FRN 2007 LPLR, Oyedepo argued that: “the issue is that where there is no reply to a counter-affidavit, the facts therein deposed are deemed admitted and conceded by the other party”.

He said: “Looking at the disposition of the person seeking your lordship’s discretion, is it safe for our witnesses, is it safe for us, to say the man in whose custody we have found multiple ammunition and gun, be released?

“We cannot put our lives in jeopardy, we will not wait until the tragic happens, and we don’t want to jeopardise the life of the complainant; he’s not safe.

“My lord, this matter is everywhere, even for his own safety, he should have a place that is safe for him; he should be in a safe custody.

“We therefore urge your lordship with due respect to refuse the application and to order accelerated hearing as we are ready to expeditiously prosecute this case and we assure my lordship there will not be any delay.”

Thereafter, Justice Taiwo adjourned till today to rule on the bail application.

Delivering ruling, Justice Taiwo held that “the defendant did not challenge the averment of the counter-affidavit and the further affidavit of the prosecution.

“I am therefore in agreement with the prosecution that the defendant constitutes a flight risk.

“Though the offences against the defendant are bailable offences, I am inclined to refuse the application for bail and order accelerated hearing.

“Thus the application for bail is refused and the defendant is to remain in prison custody, and accelerated hearing is hereby ordered.”

Led in evidence by the prosecuting counsel, Rotimi Oyedepo, the witness, Bamidele Olusegun Safiriyu, who is also the victim, narrated how the defendant defrauded him in the seemingly well-calculated fraud scheme to the tune of N266,500,000.

Describing himself as a businessman, who deals in “clearing and forwarding”, he said he registered two companies, Kodef Clearing Resources Limited in April 2008 and De-Rock Maritime Resource in July 2013 both for “the clearing purposes”

The witnessed identified the defendant in the court and narrated how their paths crossed leading to him being defrauded by the defendant who not only claimed to be an Army General, but also the son of former President Olusegun Obasanjo.

He told the Court that on a Friday sometime in April 2017, one of his trucks that he loaded going to a customer’s cold room, hit the defendant’s Honda Accord.

He said: “He detained the truck, because he moves in a convoy of soldiers.

“On Saturday the following day, I got a call from my client that some soldiers have hijacked the container.

“I became troubled because it has never happened before, and that Saturday, I was to travel out, and so I was just praying because I didn’t know what to do.”

He told the Court that some of those working with him including his younger brother had to step in to see what they could do.

He said: “Later in the day, I received a call from this young man, and he introduced himself as General Abiodun Bolarinwa, a General in the Nigerian Army and a son to Baba Olusegun Obasanjo, former President.

“He told me in that conversation that my truck was with him that the truck bashed his car, and his boys brought it to where he stays at Abule-Egba.

“Later my team also met with him and they got the issue resolved after spending about N200,000.”

“However, Bolarinwa continued afterwards to communicate with Safiriyu, and we all continued to refer to him as General.

According to the witness, the defendant came to his office in a convoy of military person with a banner of former President Obasanjo adorning one of the vehicles.

He said: “He came with a convoy and they were shooting in the air and everywhere was scattered.

“Later he sent me a message that he is going to be made the military assistant to the president at Aso Rock.

“He sent me the letter and he said he would need some assistance, claiming that in the Army you are going to provide everything you need.

“Later he said he was vying for the office of the Chief of Army Staff, COAS that he has been nominated by the President and that he needed money to press and process the appointment.

“I was reluctant at first, and started asking myself question, if he wants to become Army Chief and he claims to be Baba Obasanjo’s son, as a former president will he not just need a call from him to press anything.

“So I asked him, you said you’re Baba’s son, why can’t he take care of this.

“In 2013, a message came in to my phone saying ‘I, President Obasanjo. Then a few minutes later, he called me and said ‘Baba has been trying to reach you’, but that I was not picking his call.

“I checked my phone, I saw only a text, no missed call, and I told him; he said that Obasanjo has been trying to reach me to thank me for all I have been doing from him.

“Then later a number called me and it showed the name ‘Chief Olusegun Obasanjo, GCFR’ and I picked up the call, it was exactly Baba’s voice and he said to me to help my brother financially to become COAS that he will repay me.

“So I said, ok, sir; and that was how at various times he kept requesting for money.

“He said he needed money to travel to go and meet Emirs to make his intention known, that he has been nominated to become the next COAS.

“Any time he needed money, he will use the number, sometimes he asks for N5million, N6million.”

“I did not know that he was not even in the Army and never even passed through the Army, this I got to know much later.”

He told the Court that the defendant posing as Obasanjo’s son even invited him to Obasanjo’s birthday in 2020.

According to the witness, he was able to later get audience with Obasanjo, who denied that the defendant was his son.

Thereafter, he petitioned the EFCC, when he realised belatedly that he had been duped of almost N300 million.

The prosecution thereafter tendered in evidence the petition along with several attachments, including letters, confirmation letters and several photos sent to him by the defendant to deceive and defraud him.

The bundle of documents were admitted in evidence as Exhibit A.

The victim also took time in open court to itemise all the various money transfers he sent to the defendant, as well as several correspondence between the two of them.

Subsequently, the prosecution tendered the mobile phone of the witness in evidence, and it was admitted in evidence as Exhibit B.

The case has been adjourned till April 29, 2022 for “cross-examination”.