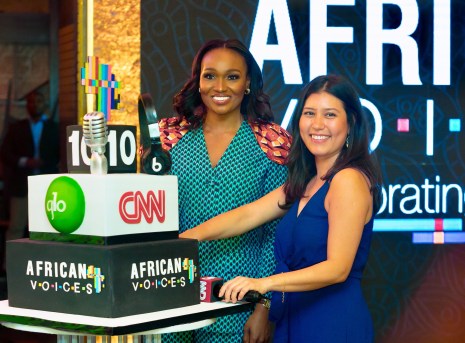 “We are proud to work with such a committed, long-standing sponsor of a show that shares our passion about the diverse culture of Africa. Together with Globacom, we look forward to this new era of African Voices and its television and digital programming that will raise the profile of the continent’s change makers amongst international audience”

The Account Director, CNN International Commercial, Zara Driss, gave the commendation in her welcome address at a cocktail party organized recently at the Sky Lounge, Eko Hotel, Lagos to mark the tenth anniversary of the 30minutes news magazine.

“It is humbling to come to Africa to see the impact of the stories and have time to reflect. I am a huge fan of Chimamanda Adiche who is well loved by Mrs Michelle Obama.”

In a keynote remark at the cocktail, Globacom’s Executive Vice Chairman (EVC), Mrs Bella Disu praised “African Voices” for being a trail blazer in the bid to close the communication gap on the African continent by featuring people across different sectors including budding entrepreneurs like Ethiopia’s Abai Schulze and legends like the late Chinua Achebe among other outstanding Africans.

Whilst expressing the hope that the programme would continue to be a platform for a mutually-beneficial partnership for many more years, Mrs. Disu enjoined all Africans to play their part in building the continent’s future, adding that the partnership with CNN African Voices had allowed Globacom to extend its impact in a unique way.

The EVC said Globacom had in the last 16 years supported sports, cultural and entrepreneurial activities across the continent, with the goal of nurturing and showcasing talents and would continue in this trajectory.

“African Voices” has successfully changed the paradigm by giving Africans a platform to tell their own stories without misrepresentations. Globacom has been the exclusive sponsor of “African Voices” since 2010.

Dignitaries from all walks of life including notable Globacom dealers, publishers and chief executive officers of major media organisations, popular bloggers, eminent Nigerians and A-list music stars including juju music maestro, King Sunny Ade, Bez Idakula, Ego Ogbaro and Orente crooner, Adekunle Gold, who entertained guests at the event. DJ Neptune who was on the wheel-of-steel delighted attendees with melodious music. All combined, it was a cool evening of fun, camaraderie and fun.

Tinubu’s Daughter: I Can Choose Anybody To Head Computer Village Market