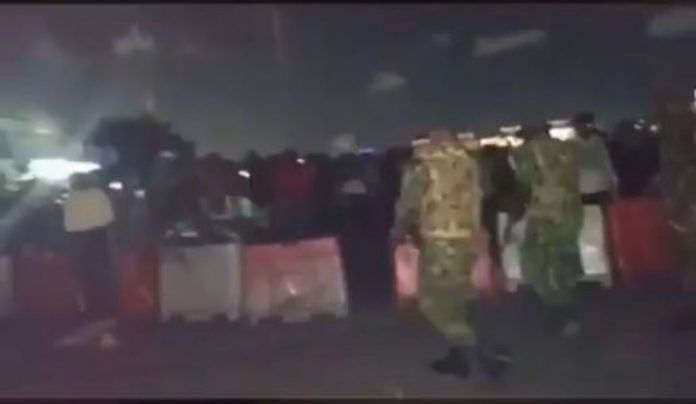 The dictionary defines massacre as a noun, that stands for the unnecessary, indiscriminate killing of a large number of human beings or animals, as in barbarous warfare or persecution or for revenge or plunder. A general slaughter, as of persons or animals, e.g. the massacre of millions during the war.

If I understand the English language well enough, the dictionary is saying, there must be multiple killings before the word massacre can be called to use.

In a ludicrous, laughable and embarrassingly unprofessional documentary, that clearly looked one-sided and surely sponsored, the CNN has released a video of what it called, Investigation that sheds new light on anti-brutality protest in Nigeria.

The video started with the sounds of gunshots and the shouts of END SARS, END SARS, they’ve killed him, they’ve killed him. This was followed by the narration of the reporter, Nima Elbagir, beginning with: “the Nigerian government denies this happened, a peaceful protest turned deadly”.

The cue runs thus, “Thousands of young people have been protesting against police brutality as part of a largely peaceful movement called EndSARS. But on October 20, these protests turned deadly, as the army and police moved in on unarmed civilians. The Nigerian army has called allegations that it fired into the crowd, “fake news” and told a judicial panel of inquiry that it did not shoot at any civilian, but a new CNN investigation can reveal this is not true”.

The first embarrassment in the poorly put report is the contradiction from one of the protesters, “the police came we are peaceful, they came and started shooting at us”. The guy said its the police. There was a distressed body on the floor, soaked in what looks like blood. But in Nima’s narration, which goes out to show some protesters, clearly and evidently not on the date of the alleged shooting, picnicking peacefully, accused the military of matching towards the toll gate, impliedly from the Bonny camp military garrison, that is a stone throw away from Lekki, just while this peaceful picnic was going on.

Using some unproven and “miraculous” methodology, Nima said they were able to see shots, long before the bullets were fired. She said, “we could see shots, and at exactly 6.43 pm, we started hearing gunfire”. It’s either Nima is in concert with those firing the shots, or there is something sinister she is not sharing out.

Nima or CNN relied on the accuracy of their camera to get the time, but they couldn’t avail the public with reliable pictures of the multiple casualties from those bizarre bullets.

Without giving any evidence of geolocation, showing the tracking or the movements of the bullets with respect to the exact location of the protesters, Nima disputed the position of the military, that said they only fired blank bullets into the air to disperse the crowd. Nima simply flashed the pictures of some fireworks, as proof of direct shooting at the crowd by the military, relying, ridiculously on the live streaming of “DJ Switch”, a Nigerian celebrity, activist and co-sponsor of the protest, that was broadcasting on Instagram.

Nothing more can demonstrate obscenity. When has the CNN degenerated to the level of using only the Instagram of interested parties, or celebrities, as a reliable source of credible information?.

Without any forensic proof, CNN continued to show bullet casings, dating back to 2005, ten years before the Buhari regime, which they claimed are from live ammunition, but they couldn’t show proof of when they have fired or pictures of the multiple victims in the killings that made up the massacre.

Particularly painful is the professional goof of relating the bullets with Serbia, a country they said, had been selling ammunitions to Nigeria since 2005.

Apart from the photograph of one Victor, whose body was lying in a pool of presumed blood, and wrapped in a white and green coloured clothing of the Nigerian emblem, Nima had not given viewers the proof of establishing massacre, at least if we go by the dictionary definition of the word.

The violent jailbreaks in at least two highly fortified correctional centres, and the razing of five police stations in Benin alone, alongside the loss of at least 100 people, who died across the country since the commencement of the protest, have made nonsense of Nima’s description of the protest as peaceful.

Had the CNN not been mischievous, or had it adhered to the rules of objectivity, it would have taken a look at the dossier of the destructions of public and private properties all over the country, in the wake of the EndSARS protests.

Experts said, businesses have been counting their losses, while the Nigerian economy, which is struggling to stand up from the COVID-19 pandemic, is thrown into additional crises.

Lagos State Government, which is the worst hit by the crises, has put its losses at N1 trillion, while the overall cost to the private businesses are expected to be in excess of two billion US Dollars.

No sane medium can describe such carnage as peaceful or the unsubstantiated killings of one or two people as a massacre.

Surely the CNN had goofed here, by permitting Nima to behave nefariously like a nincompoop.