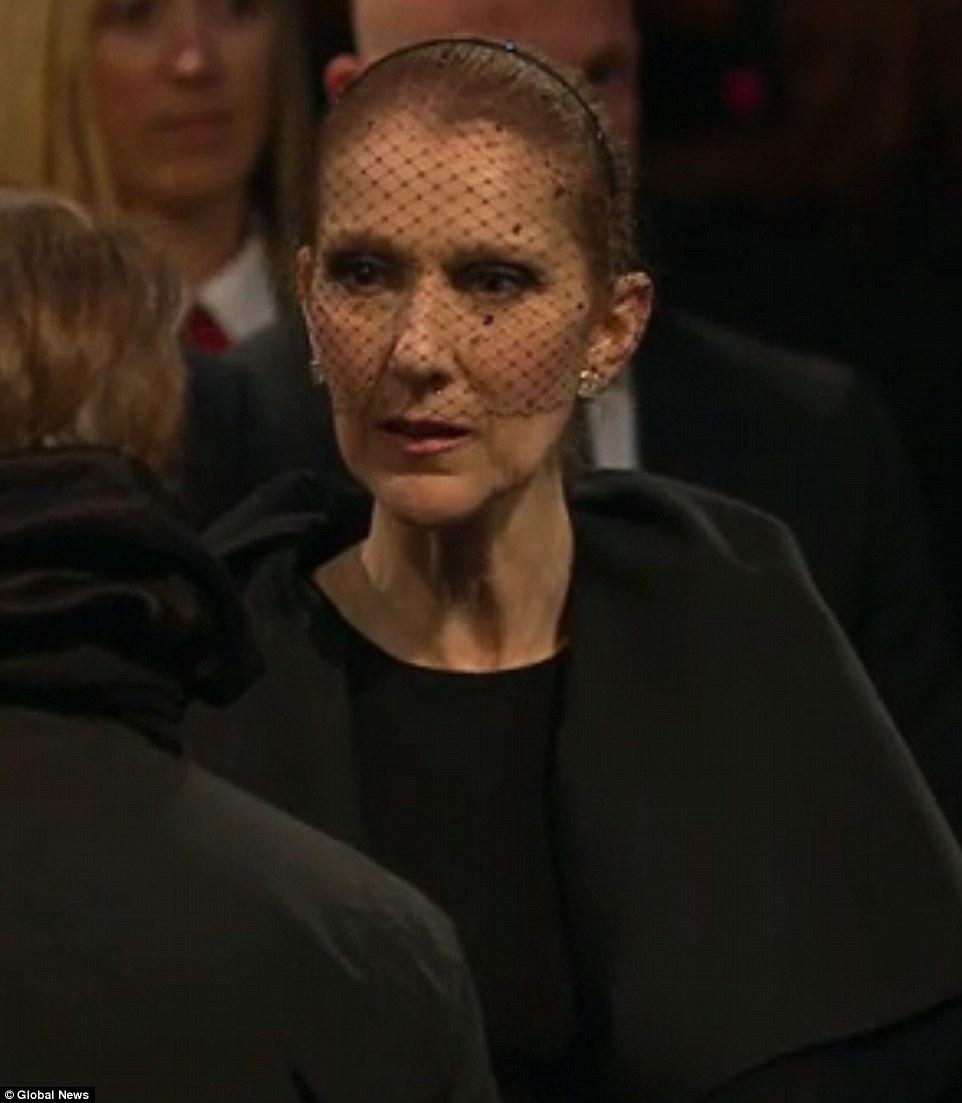 Celine Dion joined fans of René Angélil’s as they paid their final respects during a visitation on Thursday at Notre-Dame Basilica in Old Montreal.

The 47-year-old performer hid her face behind a black veil but it was clear she was distraught and had tears in her eyes in a video shared by Global News.

Angélil died of throat cancer at the age of 73 on January 14. His funeral will be held on Friday at the same basilica. 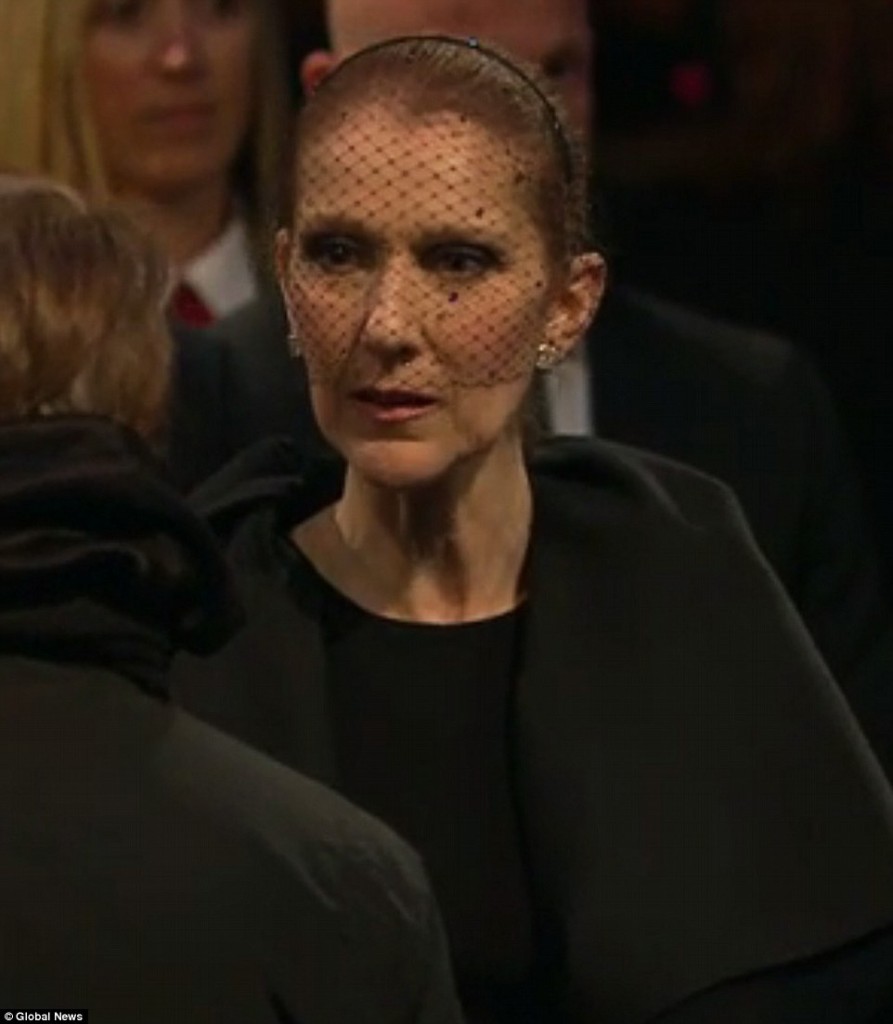 Despite her grief, the star told People magazine that she was thankful to those who have kept her family in their thoughts at this tragic time.

Speaking of those who lined up to pay their respectsin particular, Celine told People: ‘The support we’ve received has been such a blessing.’

Also at the service was her mother Thérèse, 88, and René’s brother André his sons Patrick and Jean-Pierrem, daughter Anne-Marie Angelil as well as Celine’s eldest René-Charles, aged 14, who is namked after his late father. 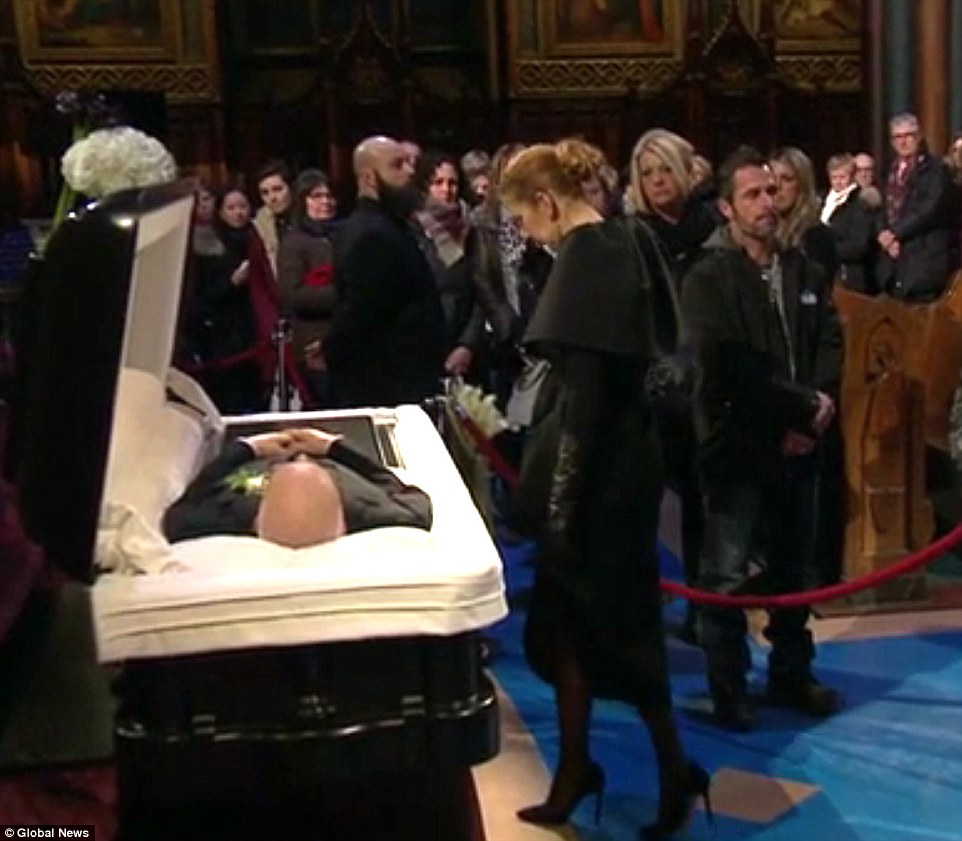 A prayer before the last farewell: The singing sensation approached the open casket with her head down and wearing a black coat, gloves and pumps 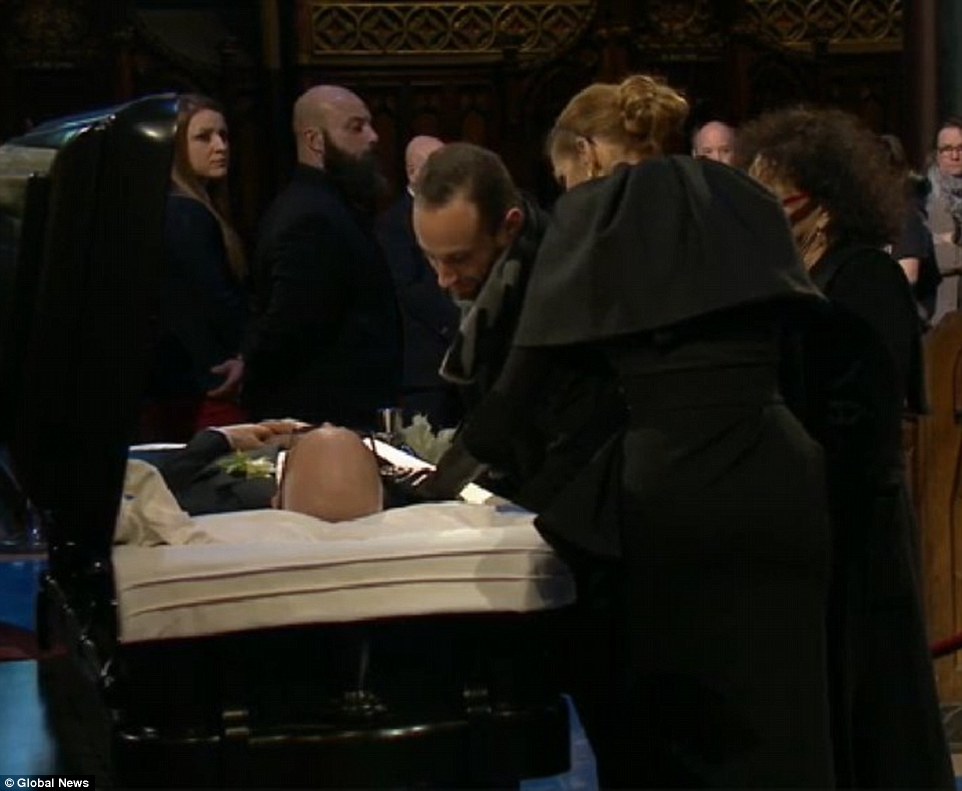 A touching moment: The Grammy winner laid her left hand on her late husband as family gathered near

The beauty made sure her makeup was done nicely as she greeted fan after fan with a handshake and sometimes a kiss. By the performer’s side was her eldest son with Angélil – René-Charles, who wore a dark suit and tie.

The show biz manager was lying in state from 2 pm until 9 p.m. at the basilica. Celine was supposed to stay only 30 minutes but she greeted well wishers into the night. Often she spent several minutes with strangers that had waited in line to have a word with the superstar.

The A New Day Has Come chart topper was seen approaching the casket where René laid peacefully. Her head was down and she seemed to be on the verge of tears.

His hands were put on top of each other and he had on a dark suit with white shirt and white tie.

Once by her husband’s side, Dion put her left hand on René’s shoulder in a heartbreaking moment 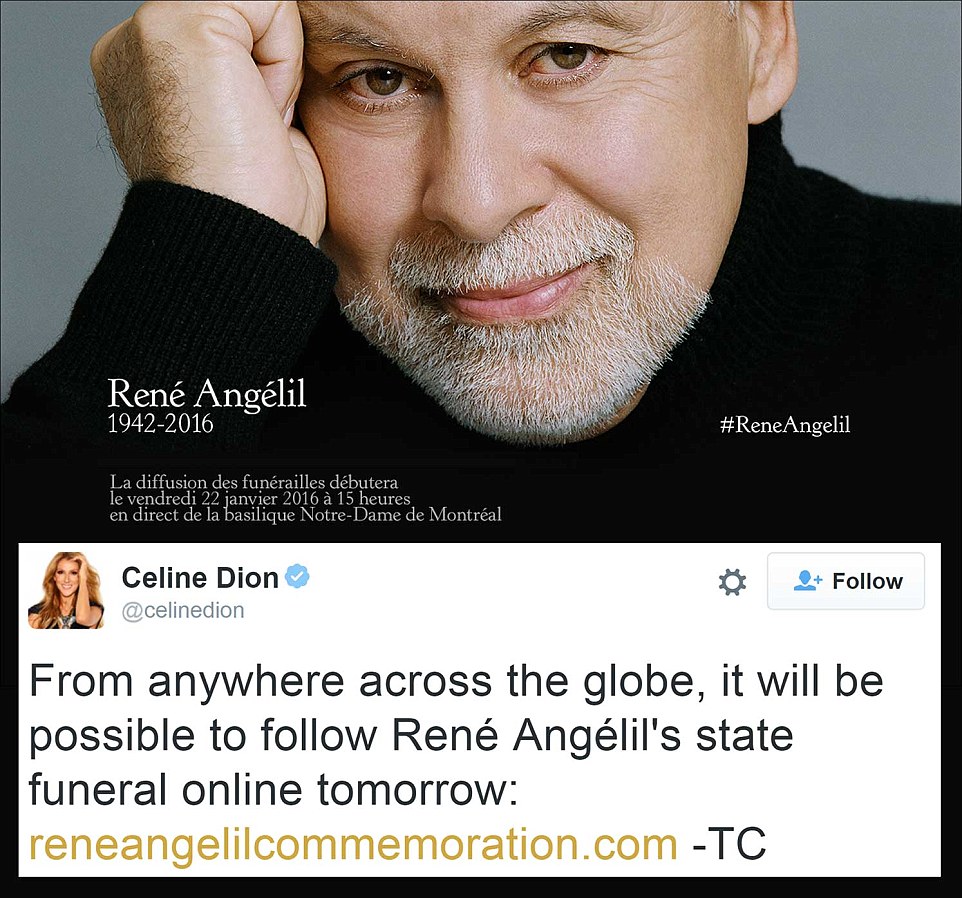 Announcement: The singer used Twitter to inform her fans they could watch her husband’s state funeral online on Friday

Several times the star broke down in tears and used a white handkerchief to help her out.

Dion was dressed appropriately in a black coat over a black dress with opaque tights and pumps. She was seen with her veil both on and off. The beauty’s red tresses were pulled back into a ladylike bun.

Hundreds of people attended the service. It is believed Angélil’s adult children from a previous relationship – Anne-Marie, Patrick and Jean-Pierre – were also there.

People magazine shed some light on the state of her mind this week: ‘Her heart is in pieces,’ a source told the publication. ‘There are no words. She’s in extreme grief right now. She’s extremely heartbroken. But she’s putting on a brave face.’

In the last year ‘the singer rarely left her husband’s side’ as he used a feeding tube, People added. ‘He had both good and bad days,’ a source said. ‘Some days he could get up and walk around the room, play with the kids. Some days he was too tired.’

A national funeral for Angélil will be held Friday at the same church beginning at 3 p.m. The flag at the Quebec National Assembly will fly at half-mast.

The funeral will be officiated by the Most Reverend Christian Lépine, Archbishop of Montreal, according to the Gazette.

Last week Quebec Premier Philippe Couillard announced a national funeral would be held to honour Angélil, who was born in Montreal.

‘We were all touched by the death of René Angélil,’ Couillard said. ‘Quebecers will have a chance to pay tribute to a man who had an impact on the cultural landscape of our nation.’

The couple are superstars in their native Canada and the funeral will be televised on three networks, according to TMZ.

In accordance with Rene’s wishes two of Celine’s songs will play during the service. The Canadian beauty will not sing at the memorial.

Angélil planned out his funeral so that the burden wouldn’t lie with the singer once he had passed.

René reportedly wanted everything prepared, even though he didn’t know when it would happen.

Céline’s stylist and longtime friend Annie Horth told People: ‘René was generous enough to prepare all of this since the last few months with Céline.’

Because of this, Céline is ‘going through [this] peacefully and with control,’ added Horth.

According to sources, René wanted to have his funeral at Notre-Dame Basilica.

A message posted to Facebook on Friday read: ‘According to his final wishes, his Funeral will be held at Notre-Dame Basilica in Montreal, where 21 years ago, he chose to marry the one who will remain as the great love of his life, the artist for which he had the most respect, the woman who gave him light and happiness until his very last breath.’

On Wednesday Dion was seen for the first time since the death of her husband. The singer looked pale as she got hugs from friends before boarding a private jet in Las Vegas with her three children in tow.

The Grammy winner had her red locks pulled back into a severe bun and her face looked strained.

The Heart Will Go On hitmaker was dressed in head to toe black, including a turtleneck, leggings and to-the-knees high-heeled boots. The beauty also had on her wedding rings.

She was seen with several handlers as well as her three children: René-Charles, aged 14, and twins Nelson and Eddy, aged five.

Rene had endured a long fight against cancer before passing away just two days before his 74th birthday.

He had been married to Celine for 21 years and as well as serving as her manager since she was a teenager.

R. Kelly claims that he was sexually abused as a child by a female relative