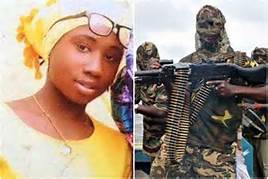 President Muhammadu Buhari says it will be counterproductive to make noise about the release of Leah Shabiru, the remaining Dapchi schoolgirl in Boko Haram captivity.

Sharibu is the only one in detention among the 119 students abducted from Government Girls Science Technical College, Dapchi, Yobe state, on February 10.

While five reportedly died, the remaining were returned to Dapchi in March but the insurgent kept Sharibu, the only Christian captive.

She was said to have rejected the option of converting to Islam to regain her freedom.

Many individuals and groups have called on the federal government not to abandon the victim.

Speaking when he hosted Justin Webly, archbishop of Canterbury, at the Abuja House in London on Wednesday, Buhari said his government had been working to secure the release of Sharibu.

“We are managing the matter quietly. Making noise would not help. We are collecting as much intelligence as possible, working with the Red Cross and other international organisations,” he said.

“There are too many fraudulent people around, who claim they can do this and that. We won’t deal with them. That was how we got the Dapchi girls back, and the Chibok girls.”

On his part, Welby said they would continue to pray for Buhari.

“You have my best wishes on your recent decision. I read your declaration speech. We are neutral as a church, but we will pray for you,” he said.

“Great statesmen are those who run for the good of their country. We will be praying for you.”

The archbishop presented Buhari with a copy of his recent book, ‘Reimagining Britain. Foundations for Hope.’