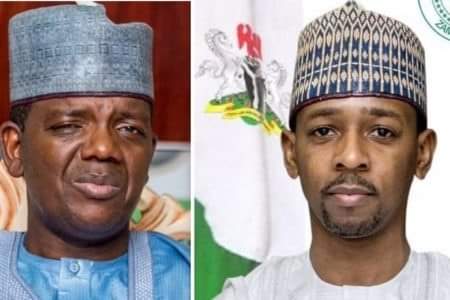 A Federal High Court sitting in Abuja, on Thursday adjourned hearing to April 29, on an application challenging the defection of the Governor of Zamfara state, Bello Matawalle.
The application was filed by the Peoples Democratic party (PDP) and the former Zamfara deputy governor, Barrister Mahdi Aliyu Mohammed,

Mohammed who refused to decamp to APC, was impeached by the Zamfara State House of Assembly over allegations of abuse of office.
The PDP and Mohammed who are plantiffs in the 2021 application, are urging Justice Inyang Ekwo to interpret ” Whether upon a correct interpretation of the provisions of Section 1(2),287, 221, 177(c), 106(d) and 65(2)(b) of the constitution of the Federal Republic of Nigeria 1999 (as amended), any member of a political party other than members of the PDP (plaintiff), being the political party who won the highest votes in all the elections in 2019 General Election in Zamfara state is entitled to occupy or hold the office of Governor, Deputy Governor, Member of the House of Assembly of Zamfara state or occupy any position or seat as a Senator or Member of the House of Representatives of the Nigerian National Assembly for the purpose of representing any senatorial district or electoral constituency in Zamfara state for the period beginning from May 29, 2019 and ending on May 28, 2023.”

The Independent National Electoral Commission INEC), APC, President of the Senate, National Assembly , Speaker of House of Representatives , Governor of Zamfara , Chief Judge of the state, Governor Bello Mohammed Matawalle and 33 others are defendants in the case.

Today was scheduled for hearing on the matter but the plantiffs’ counsel, Emmanuel Ukala (SAN), told the presiding judge that he was served with processes from the defendants in the case and would need time to reply.
Mike Ozekhome (SAN), who represented Zamfara governor and other political stakeholders in the state, affirmed that he filed an ‘application for extension of time’ on April 6 (Wednesday).

Justice Inyang Ekwo asked the rest of the lawyers if they were opposing Ozekhome’s process and they all said they would not.
The judge subsequently granted Ozekhome’s application.

Furthermore, another lawyer, Emeka Okpoko announced appearance in the matter, saying he was representing 14 Zamfara residents (who he later told the press were chairmen of LGAs in the state) who are seeking to be joined in the case.

Justice Ekwo observed that due to processes that require reply and counter affidavit, he would have to adjourn the matter.
He also said that he had a function to attend to.
As such, the lawyers agreed to return to court on April 29 and the judge approved the new date for hearing.

Accord Party Gives Ladoja Conditions To Return To Party

THE LACRIMAL LETTERS (2) To Iyorchia Ayu. With Tears. POSTERITY WATCHES!