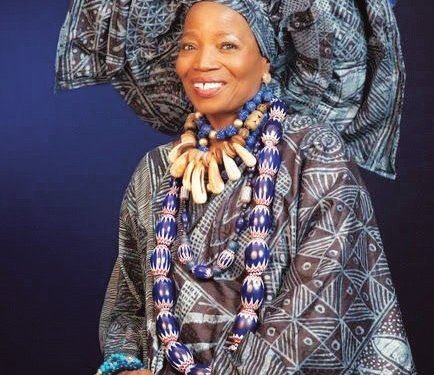 She is the ‘First Lady of Gele’. Her headgear, which is popularly called gele in Yoruba, has earned her the title by Nobel laureate Prof. Wole Soyinka and the wearer of the world’s largest gele on Meristem Nigeria Limited-sponsored advert. Chief Monica Okundaye’s art has set her on the world map and earned her several recognitions, including an honorary doctorate from Rhodes University, in the United States. This year’s Society of Nigerian Artists (SNA) October Rain exhibition is dedicated to her. In this chat with Evelyn Osagie, she speaks on her art, family and relationship with the late Susanne Wenger.

JUST like the hat is a crown for men; so also is gele (headgear) to women. Women wear the head tie as a crown.

Gele is a Yoruba culture that is as old as the tribe itself. A Yoruba woman, especially during celebrations such as marriage, is incomplete in her dressing without the gele.

Even in developed countries like the United Kingdom, the queen wears a hat. That is her own crown or gele. Every married woman wears her gele. They are the queen of their husbands. So, when my great grandmother used to tell me about gele, I said: “That would be my signature!”

Prof. Wole Soyinka carried me from here to Napoli to go and put gele on about 120 women, including the Mayor. He then called me, ‘the First Lady of Gele’, which he calls ‘Gele Gala’ in his new book, which would soon be out. It was supposed to have been out if not because of COVID-19.

When the British are having their gala nights and their horses arrive with everybody wearing different hats, he says it’s the same thing with our gele – that there should be a gala night for our gele. The gele in the Meristem’s advert was more than 27 yards. When I went to Rhodes University for the doctorate degree, they wrote a paper on me in which they described me as the “woman who used 27 yards for gele”. That challenged me and I said to myself, “This, my gele is too small; I am going to use that 27 yards for the gele”. That was what led to the Meristem’s gele. That is the biggest gele. Two people had to stay on top of a leather to tie it. So, gele is my crown. And I have always wanted every woman to know that her head tie is her crown. And they are always the queen of their husbands.

Magic that kept you  on top against the odds

When I was the only female struggling among the male artists in Osogbo, then, they used to say: ‘This thing (art) is not for women; it’s for men. Nevertheless, in between this struggle, I would work with everybody amicably. Patience, what we call Suru, ìfaradà (endurance) and Aforiji kept me going. I suffered when I was growing up. That’s why I’ve always wanted women to have their money and their handwork. I’ve always told them to market themselves in a good way. When you are going out, you’d wear what you make; that they would not only ask if you made it but commission you to make theirs. There are not many women in the arts. That is why I appreciate men like Ulli Beier and Nkang Ini Dan of SisterART (#sisterART Global Visual Arts Community). They are very rare. Look at Ini, how he is supporting women today.  Back then at Osogbo, they’d always give credit to the Ulli. But the teachers of all Osogbo artists were female. Georgina Beier and the late Austrian woman, Susanne Wenger, was 30 years old in 1950 when she came to Nigeria and became one of the teachers and founded Osogbo Art.

And Ulli told me to go tell people that his wife is the artist; and that was how anywhere there was an exhibition on Osogbo arts, he would ask me to do the opening and I’d talk about Georgina and Mama Susanne.

There is no fetishism in Osogbo Art. Osogbo artists didn’t go to school to study art; but are self-taught. Their art is inborn. They derive their inspiration from dreams and their imaginations.

And because their inspiration comes from dreams, they create what their minds see, which sprout essentially from their socio-cultural environment; people often link them and their arts to fetishism.

Then, the teachers would give you pen and paper and instruct you on what to do. They’d give you board and plywood and ask you to get creative with it. They’d give you wood and ask that you print on it or carve your designs on it. That was how they founded Osogbo artists. My old works are like that too – whatever we saw in our dreams, we drew. And that was what made people think it’s fetish. I would say, it was when I got to Lagos that I started doing fine art (laughs). Before then my art was essentially inspired by my dreams.

The art in my background

And as I’ve always said my art creativity is inborn. I was born into the art; my parents were all artists. I am from Ogidi Ijumu, Kogi State. I am the fifth generation of artists from my direct family.  My parents were artists.  My great-great grandparents were into  adire making, indigo dyeing; and my great-grandmother was also into weaving.  And my mother was into embroidery, weaving and painting with adire before she died.  She was not up to 30 years old when she died.

My relationship with Wenger

We were very close. She took me as her daughter. And I also adored her like a mother because I never had a mother. I told her everything and she advised me. Her advice was so useful to me. We were so close that if anyone offended me, she would fight on my behalf.

She was very sick when she turned 90 and everybody thought she was going to die. But I carried her to the hospital and she survived. She died three years later. She divided all her property while she was alive. I was so close to her that when she did her will, she gave me one.

Marrying family with career as an artist

Marriage is give and take. We manage ourselves. You are the manager of your husband; your husband is your manager. And you’d manage yourself. Indeed, it has been very exciting and I thank God. There is no perfect marriage.

It’s hard work, management and patience: you’d also have to make out time to spend with them (husband and family). I divide my time into three – my husband, family and art.

Up till now, I still cook for my husband. He doesn’t eat house girl’s food. I don’t even have one and that is why the marriage is working. I wake up at 5am in the morning to prepare breakfast. He eats by 6.30am; then I will prepare the rice he would eat at lunch, put it in the bag and bring it to the gallery. He will leave for home by 3pm. And I’ve already prepared the pounded yam he would eat in the evening and put it in the microwave. And when I’m travelling, I’ll make the food he’d eat for the period I’ll be gone.

My advice to  aspiring artists

To any young person who wants to become an artist, I would say they should have a focus and patience. It doesn’t just happen in one day. I started this journey 55 years ago.

Whatever you want to become in life, it is very easy for you to get there, but you have to have plenty of patience, endurance and everything that it takes. When a little opportunity is given to you, grab it.

I want to build a bigger gallery in Abuja next year. It would carry works from about 40 countries in Africa. It is going to be a big project but I know God will do it. And by the end of this year, I want to open a female gallery, featuring solely women’s works, not far from me here. So, I can always send the females to go to their gallery there, some people are coming to see you people. So, they can be rotating themselves. Anybody who can teach would have the opportunity to teach those who want to bring their children to come and learn art. And women artists would be able to make more income in the arts.