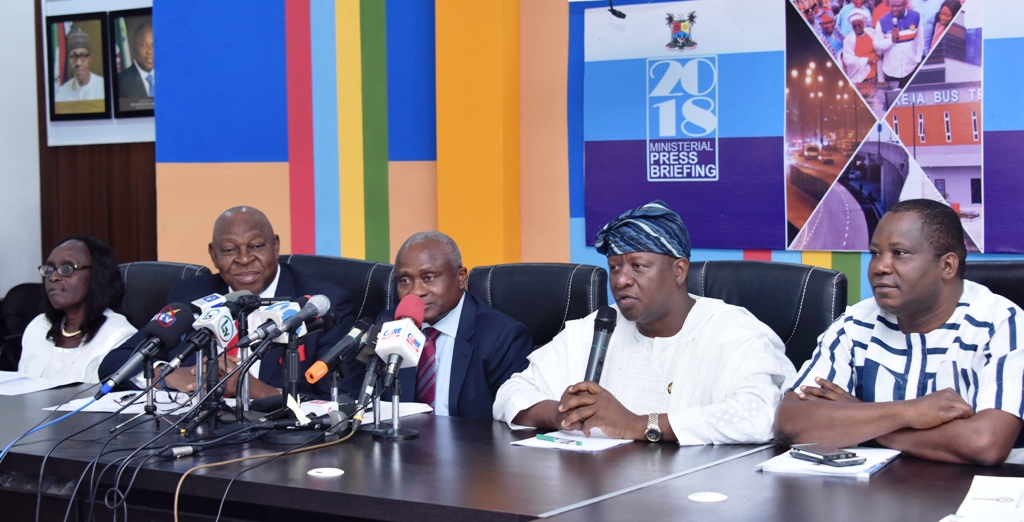 The Lagos State Government on Friday said comprehensive plans are currently being firmed up to generally address prevalence of drug abuse under the mental health policy in the State, revealing that a law to that effect has already been updated.

The Federal Government had on Tuesday directed the National Agency for Food, Drug Administration and Control (NAFDAC) to stop further issuance of permits for the importation of Codeine as active pharmaceutical ingredient for cough preparations with immediate effect in response to the gross abuse of Codeine usage in the country.

Speaking at the annual Ministerial Press Briefing to mark the third anniversary of Governor Akinwunmi Ambode’s administration held at the Bagauda Kaltho Press Centre in Alausa, Commissioner for Health, Dr. Jide Idris said before and after the ban was announced, the State Government had been engaging with key stakeholders, adding that it was important for serious attention to be concentrated on mental health issue and affiliated matters.

Responding to a question on what the State Government was doing in that regard, Idris said: “On the issue of Codeine, that is very interesting and the question is how are we as, a Ministry, ensuring the compliance by manufacturers. I must tell you that the Drug Control Unit in the Ministry is very active. We are also operating in conjunction with NAFDAC. The ban principally is a NAFDAC initiative but as a State Government we did not wait; we are more proactive and ever since this issue came into light, the Ministry has been engaging and very soon, we will come out with a more comprehensive programme.

“This is because we would not look at Codeine alone; we are going to look at it under drug abuse. Codeine is just one substance out of many that are being abused. It also goes to show you the extent of the mental health situation in our country and that is why like we said something ago that we are putting more emphasis now on mental health. It is a serious issue; it is one area of the health sector that people generally do not even address and that is why as a State Government we are being proactive.

“In line with this, we have updated our own mental health law as against what is happening at the federal level; we have a mental health policy and we are currently now implementing our mental health programme to cover all tiers – primary, secondary and tertiary health care systems. This is a comprehensive thing and there is no doubt about the fact that there is a major mental health problem in our country and this Codeine is just a tip of the iceberg,” the Commissioner said.

Speaking on activities of the State Government in health sector in the last one year, Idris said it was gratifying to report that the Lagos State University Teaching Hospital (LASUTH) successful performed its first open-heart surgery on a 32-year-old patient solely by indigenous cardiac surgery team, as well as fourth successful cochlear implant and kidney transplant surgeries, while LASUTH in conjunction with Rotary International and Alliance for Smile successfully carried out surgeries for six patients with cleft lip palate deformity

He said a total of 61 Primary Health Care Centres (PHCs) were either constructed or upgraded and furnished with medical equipment within the period under review, while 38 others are ongoing, in addition to approval given by the Governor for 1,000 health workers to be recruited for the PHC system.

Apart from new access road and gate constructed in LASUTH, the Commissioner said the Child Care Centre otherwise known as Ayinke House in LASUTH would be commissioned in June this year by the Governor, while the phased installation of CCTV with a monitoring room to enhance security of lives and property in the hospital in about 36 strategic areas was currently being done.

The Commissioner said as a follow-up to the successful containment of Ebola outbreak, the State Government in collaboration with Global Partnership Programme, Canada was in the process of establishing a Bio-Containment and Bio-Safety Laboratory within the premises of the Lagos Mainland Hospital, Yaba to facilitate prompt diagnose of diseases of public health importance, while the Health Insurance Scheme of the State Government would commence in 2018.

“On health insurance, we are doing everything to ensure that the scheme is successful. Already, we have given formal letters of award to selected seven health insurance agents. So far, 179 private and 68 public primary care facilities, and 27 General Hospital including LASUTH have satisfied the minimum required standards for the scheme. An additional 42 public PHCs will be added.

“The one per cent of the consolidated revenue earmarked by law as approved by the House of Assembly as equity has been budgeted for in 2018 appropriation. This scheme will commence this year; I am very sure of that,” Idris said.