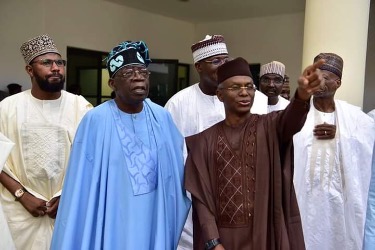 All Progressives Congress National Leader, Asiwaju Bola Tinubu, said on Tuesday in Kaduna, Kaduna State that an attack on one Nigerian is an attack to all of us in the country.

He spoke when he visited the state to commiserate with the government and people of Kaduna over last week’s attack on Abuja- Kaduna train.

Asiwaju Tinubu urged all Nigerians to contribute their quota to efforts to rehabilitate the victims and prayers for a repose of the soul of those who died in the incident.

He said: “I’m here to sympathize with Governor Nasir el-Rufai and the people of the state over the train attack. It is a national disaster. It’s a blow to all of us.
“Nigeria bleeds. We need to fight terrorism with all we have. I understand some people were killed while some others are missing. It is frustrating.

“We will support Gov. el-Rufai on the rehabilitation of the victims. The governor is a symbol of our unity. Once in a while, we still remember the first stanza of our old national anthem- although tongues and tribes may differ, but in brotherhood we stand.

“If enemies of peace and progress think they can deter us as a nation, we must together stand against them and say no”.

Asiwaju Tinubu later disclosed to Governor el-Rufai a donation of N50million to cushion efforts to rehabilitate the victims of the attack.

He also visited St Gerald’s Hospital to see some of the victims.

Responding, Governor el-Rufai expressed gratitude to Asíwájú Tinubu for taking time to come and commiserate with the state.

He said the visit preempted his plan to come to Lagos to thank Asíwájú for honoring the people of Kaduna State by canceling his 70th birthday on the day of the event because of the train disaster.

“This gesture is a powerful show of leadership and empathy unprecedented in our national history.
“The government and people of Kaduna State will not forget this. We are grateful to you for your sacrifice and commitment to the greatness of our country.”