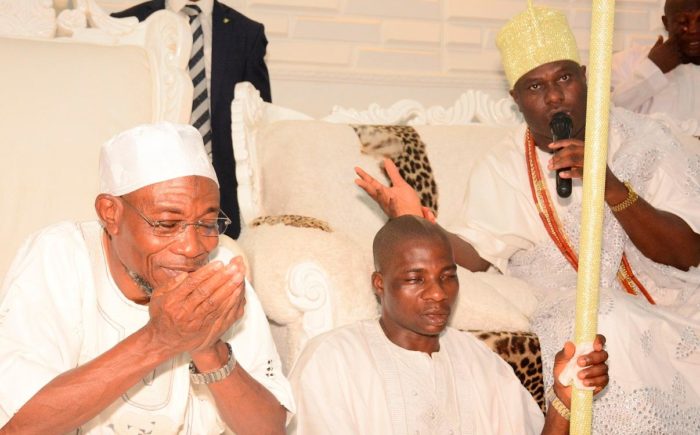 The Ooni of Ife, Oba Adeyeye Enitan Ogunwusi, Ojaja II has commended Governor Rauf Aregbesola of Osun state for keeping his campaign promises to the people of Ife and the entire state in the past seven and half years.

Oba Ogunwusi described Aregbesola as someone who has the fear of God, hence the achievements that he has recorded.

The Ife monarch urged politicians to eschew politics of bitterness as the nation enters electioneering mode, beginning from elections in Ekiti and Osun this year and the general election next year.

The Ooni spoke on Wednesday when Governo?r Rauf Aregbesola and his team paid a courtesy visit to the monarch before his goodwill visit to Ife Central/ East/ North/ South Federal Constituency of the All Progressives Congress (APC).?

The monarch commended the governor for the giant strides he has made in developing the state.

He asked him not to relent in developing the state until his last day in office.

Oba Ogunwusi called on members of the APC in the state to close ranks. He also called on Osun residents to embrace peace and ensure a violent free politicking.

“Aregbesola has been faithful to his promises to the people of Osun and this is because he is a God fearing man and I commend him for this. Osun has no doubt thrived and developed under the administration of Aregbesola and this I am so proud of”.

Aregbesola said all hands must be on deck at ensuring that there is continuity in the state by the succeeding administration in November to consolidate the developmental foundation that has been laid by his administration.

Aregbesola told APC members that he came to sensitise them ahead of the September 22 election in the state.

He urged members to remain firm when the party eventually picks its candidate for the election.

“We are in the present situation due to the 16 years misrule of the PDP government. PDP bastardised every facet of our economy. It put a lot of burden on our nation which the present government has been working to tackle.

“Nigerians are not surprised that PDP is not destined for good things and it can never do good things, no matter what, because it is characterized with bad people who do not have interest of the people at heart”, he added.