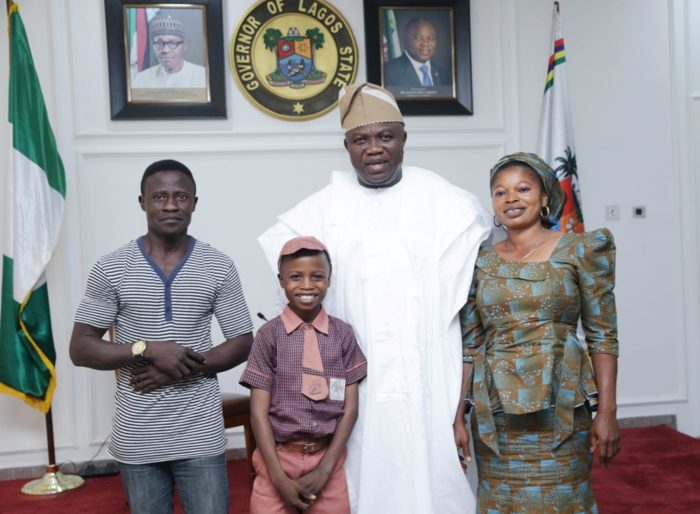 Ambode, who hosted the artist alongside his parents, teachers and instructor, promised to give him educational support, as well as help to nurture his talent to become a great artist later in life.

The governor also pledged to support Waris’ instructor, Adeniyi Adewole Wasiu, who is said to have an Arts Academy, Ayowole Academy of Arts, where he trains young artists.

Briefing journalists after the governor hosted the artist at Lagos House in Alausa, Ikeja, Commissioner for Tourism, Arts and Culture, Mr Steve Ayorinde said the development was basically to appreciate and encourage the young hyper-realist and as well to assure him of the readiness of the State Government to give him the needed support.

According to Ayorinde, “You would recall that Waris was one of the star attractions during President Macron’s visit to Afrika Shrine. Before painting the President and presenting the portrait to him, Waris had become a household name thanks to the special story done by a media house.

“So, the Governor has invited him and his parents to come and meet him and because the Governor is interested in his education and if you like the welfare of his parents, His Excellency has promised to assist just like he did to the Footprint of David boys who had a special performance at the State House during the Children’s Day.

“So, the Governor is interested in his school. We are happy that Waris is a product of a public school and you could see that the Principal of his school is here and she is happy. The Governor has also acknowledged the contribution of Waris’ mentor, Adewole who is here and because he also has a Arts Academy that inspired and produced Waris, His Excellency the Governor thinks that that Arts Academy should flourish and he is going to also support him, his career and what he is doing,” Ayorinde said.

The Commissioner added that since the works of the young artist became public knowledge, the State Government had taken special interest in his case, saying that the objective of government was to ensure good education and training for Waris to become a great artist later in life.

“The Ministry of education has been involved from day one since the story was reported but our Ministry (Tourism, Arts and Culture) would also be monitoring Waris. He is already in JSS1; he is talented as an artist but then that is not the only subject that he would be taking.

“We want him to be a successful well-rounded student first and foremost and of course as an artist. It is a long haul thing but first good education and let him continue as a good artist,” the Commissioner said.

Responding, Waris said he was extremely thrilled to meet with President Macron and Governor Ambode, saying the development was a life-changing moment for him.

“I am very happy and excited. I thank Governor Ambode for this opportunity. Now, I want to study my arts very well; I want to be a good artist, great artist in the world,” Waris said.

Also speaking, Waris’ parents, Mr and Mrs Mutiu Kareem said the feat attained by their son was a significant turning point in their lives, and thanked the State Government for the huge support they have so far received.

“I thank God for this. What has happened in my life through my son is something I never thought would happen to me but this is a miracle. I am so happy. I want to thank Governor Ambode for all he has done for us and also my son’s instructor who trained him, as well as his teachers and mother,” Kareem said.

Christiane Amanpour Divorces Her Husband After 20 Years Of Marriage