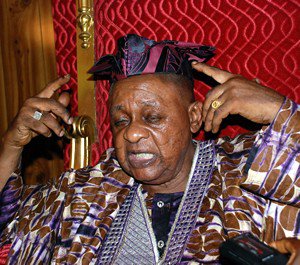 The Alaafin of Oyo, Oba Lamidi Olayiwola Adeyemi III, has warned politicians against causing disunity between President Muhammadu Buhari and his Vice, Yemi Osinbajo, who is currently the Acting President.

In a statement, he personally signed on Thursday, Adeyemi claimed that some political gladiators are playing politics with the health of the President to destabilize the presidency.

The monarch urged Nigerians irrespective of religious and ethnic differences, to remain focused and united in their prayer for the quick recovery of the President.

Adeyemi said: “In this respect, nothing should be by any form of political insinuation to break the wall of unity and cohesion in the presidency, especially between the President and his very loyal Vice, Yemi Osinbajo, SAN.

“It is on this note that I am appealing to all Nigerians, irrespective of religious or ethnic differences to remain focused and united in their prayer for the quick recovery of Mr. President.

“The President had remained faithful to the Nigerian cause. He deserves reciprocity from all Nigerians by being faithful to him too in a united prayer for his quick recovery.

“I have been following with great interest, though mixed feeling, comments that have been generated on both social and conventional media on the state of health of the President and Commander-in-Chief of the Armed Forces, General Muhammadu Buhari.

“Let me state very clearly and unambiguously that in African culture, it is not proper to speculate the death of the sick. In Yoruba culture in particular, it is abomination not only to speculate but to wish a fellow mortal dead. Neither is it proper to mock the sick because only God determines the future of everybody.

“In the custom belief and tradition of the Yoruba, death is not age determinant. That is why in Yoruba tradition, we always pray for the recovery of the sick, no matter his age.

“In the particular case of President Buhari; although like any mortal, he may be physically sick, that sickness is not in any way transferred to the style and level of governance in the country. In other words, the President might have been delegating some responsibilities to the Vice President; he is still much in charge of the government.

“That is why recent insinuations and interpretations including some political hypothesis on the State of the President’s health is not only uncalled for but unwarranted. It is both uncharitable and untenable for the state of the health of President to be given any ethnic insinuation of any form. Let me state with every sense of clarity and candour that it is not the practice and tradition of the Yoruba to benefit from the misfortune of others.”