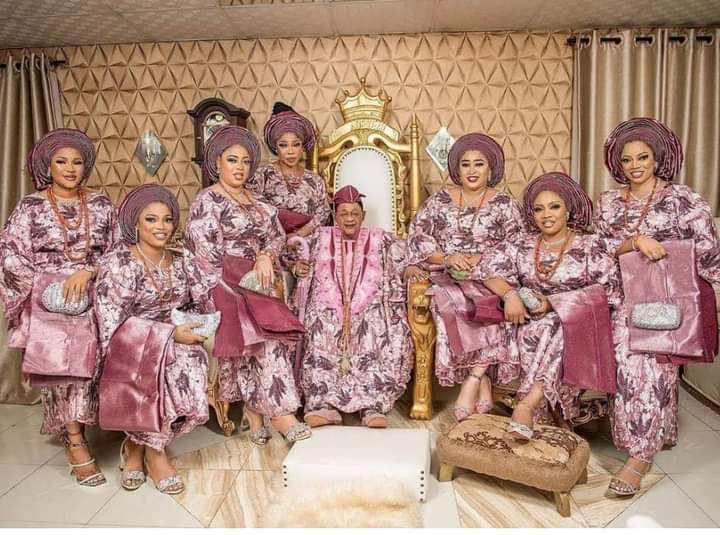 The royal household of the Alaafin of Oyo, Oba Lamidi Adeyemi III, was on Saturday morning thrown into mourning with the demise of the traditional ruler.
The revered monarch fondly called ‘Iku Baba Yeye’ died on Friday at the Afe Babalola University Teaching Hospital, Ado Ekiti.
His family consists of his Oloris, who are mostly young and beautiful women, his children and other relatives.
Before his demise, Oba Adeyemi, was not one to hide his beautiful Oloris away. He stepped out with one or more of them for occasions and travels, usually decked in similar outfits.
According to reports, the late Alaafin had over fifteen wives with Ayaba Abibat Adeyemi, as his first wife.
There are a few other older Oloris but his love for young, pretty, fair-skinned brides has always tickled the fancy of the public.
Some of his young and pretty wives include; Olori Memunat, Olori Damilola, Olori Anu, Olori Mojisola, Olori Ola Badirat, Olori Folashade, Olori Omobolanle and Olori Rukayat Abbey Adeyemi.
In a 2018 interview with our correspondent, the late Alaafin, revealed how he married all his Oloris.
He said, “I did not propose to any of my wives. They desired to be with me because I sent them to school. After their university education, I told them to leave but they refused and insisted on staying with me here in the palace as my wives. The least educated of them has a Higher National Diploma and is now in the University.
“I don’t begrudge or offend women. Marriage is an institution that must be defended. Each partner has a role to play in the marriage. My wives have their individual quarters. God has given me some type of ability and grace to keep a woman, especially beautiful women. I don’t disclose my conversations or activities with one wife to another. I maintain a strict code of confidentiality.
“I have learnt that I must positively make an impact on people and make a great first impression. Of course, they (wives) sometimes have disagreements and conflicts of opinion but I have been ‘graced’ by God to know how to ensure that the conflicts don’t escalate.”
On his first wife and how he fell in love, the late monarch said, “I have never approached a lady; they come to me. My first wife was a friend to my younger sister of blessed memory. My sister introduced her to me and though she wasn’t educated, she gave me the first lawyer in our family, my son, Tunde. I truthfully do not know the art of chasing women.”