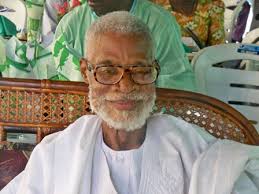 ‘Honest Man’ was how we called him. And he would grin and reply: ‘The Only One in the World!’ After which we would all burst into laughter in an exchange that had become a pleasurable ritual. No one asked anymore about the origin of the cognomen, and only few knew. Long ago, some uncle or sibling had conferred him with that title on account of an incident in which he alone had dared tell the truth, even in the face of dire punishment, and the name had stuck ever since. But it was not that story that mattered to us. He was, simply, our friend, and we called him like that out of fondness and love.

But now he is gone. Love was not enough to hold him back. Love is never enough antidote, alas, against the lethal fangs of death. He has gone, and we are left with the mourning. Gone, with his cognomen, and his stories, and his laughter. Akinwumi Isola, the one and only Honest Man, is no longer here among us. Arinnako doju ala!

His life enriched us.  Through witticism and wisdom, humour and simple sagacity, Honest Man—‘The Only One In The Universe!’—drew people like a magnet around him. Laughter was easily his entrancing tool and trademark, so much so that, in his company, it was impossible to be moody or morose. At least not for long. Endlessly, his imagination invented yarns that almost cracked your ribs, one joke after another spilling out in an astonishingly fertile sequence—until you later pondered their deeper meanings, and discovered that the jokes were only jokes on the surface, were in fact hidden conundrums with profound tokens of insight.

And so, as you laughed, you learnt. For in the end, Isola was like a herald of the old ideals of virtuousness and integrity, what our people have aptly named iwa omoluabi. Like Orunmila, deity of the divining tray, his words were sometimes prophecy or pharmacon, sometimes mere persiflage meant to tease and titillate, and sometimes fables of our human and collective worth, chronicles that we too often forget about our ancestral footsteps in the sands of time.

This undoubtedly is what I will personally miss the most in his demise, his pedagogic authority and guidance. For he was teacher as well as friend to me. It was through him, I must now confess, that I was able to recover my cultural identity and become a Yoruba man again. What do I mean by this, you will ask perhaps? Especially when I add that this was his greatest gift to me and constitutes a vital aspect of my biography? Let me explain.

Isola was a deeply authentic Yoruba man, in the best sense of the term. I suspect that it was through his study of French at the university that he became a cultural gladiator. The French are so culturally self-assertive and chauvinistic that, in studying their language, they also compel you to imbibe, and believe in, the supremacy of the French civilization. The creed of refinement in taste and conduct, of selective hauteur or bienséance, of measured arrogance in all things, is forced upon you the student as an exclusively French thing, sui generis. Everyone else is a crude and uncouth barbarian. You are civilized only when and if you speak their language.

Paradoxically, however, what they achieve through this sedulous indoctrination, particularly if you are Yoruba, is to rouse you into rebellion, to provoke you to plunge back down into your own origins to counter the French disdain. So, Isola came out of college, to become a fervent African nationalist, and specifically Yoruba language apostle. He would henceforth speak only Yoruba at all times, except when otherwise obliged; he taught himself to master, and manipulate, the language’s lexical affluence, its plenitude of phonemic nuances, its manifold resources for rhetorical elucidation, for musical enchantment, for suggestive trope. In his mouth proverbs and aphorisms made communication soar to exciting frontiers. Like his friend, the recently deceased Faleti, Isola wielded the Yoruba language like a wand of sorcery: listening to him was euphonious delight.

I could not therefore have found a better master to teach me. I needed a teacher badly, for I had come out of one of the old colonial government colleges. The syllabus there, as everybody knows, was impeccable. We had the best teachers, superb libraries and laboratories, but a cultural education that turned us at best into mimic Britons. Our mostly white teachers, concerned to discourage tribalism and class distinctions, and nurture us into patriots of a new Nigeria, brought us up as one family in which our different local languages were strictly prohibited as ‘vernacular’, and we all learnt to speak with pride in our various diction of the Queen’s English.

All this worked very well for us as long as the British were in charge. But when Independence came, and our people took over the reins of government, we found ourselves suddenly at a terrible disadvantage. We continued to excel of course as engineers, medical doctors, teachers, civil servants, such strictly professional vocations. But in politics and agnate public pursuits, we had no training, no experience, no expertise. Unlike those we used to deride as products of inferior ‘bush schools’, we could not communicate directly with our own people any more or relate to them in our own language; we needed translators. Contemptuously they mocked us therefore as alienated hybrids speaking a useless ‘grammar’.  And with shock, we discovered that our education was now like a betrayal, our acquired ‘sophistication’ a sham, our Oxbridge accents a fake currency in the market of national discourse. To be relevant therefore we had to re-Africanize ourselves, learn to dance bata and juju instead of waltz or foxtrot, sing traditional folk tunes, play ayo along with cricket, know who the orisa or the egungun are, and so on.

My case was probably worse than most. After an unstable childhood, and then seven years of the government college boarding house, where I also remained for most of the vacations, I was virtually illiterate and dumb in the Yoruba language and knew little of our culture. I remember once going home and not being able to hold a conversation with my grandmother who spoke no English—and she ironically being proud of it: her grandson had become a black Englishman!

You can imagine how serendipitous it was then to meet someone like Isola and make friends with him. Slowly, ‘small by small’ as they say, I began through him to learn to speak Yoruba and write it well. Simply by being in his company even was sometimes like sitting in a classroom. Probably without being conscious of it himself, he taught me about our customs and traditions, our gods and goddesses, our history and our Weltanshauung. The rest I read up in the books he recommended, or gathered from consultations with his friends, virtuosos like Faleti.

It was such a triumph for me then when, at my humble request, Isola consented to be my principal consultant and collaborator in almost all my projects. When for instance I produced Morountodun, Honest Man it was who composed the oriki we chanted to Moremi. With Esu and the Vagabond Minstrels, he was always around at rehearsals to offer needed counsel. And others, and others. At the far end of the telephone, countless times, he would respond patiently to my urgent inquiries about names or customs or events and dates in Yoruba history. And I believe most people still recall our grand collaboration on the dramatization of D. O. Fagunwa’s books for the Chams’ Theatre Project not too long ago. That was a truly formidable challenge, transmuting Fagunwa’s prose first into English, and then into dramatic form, but with Honest Man by my side and the loyalty of our artistic directors, we made a magnificent feast of that assignment!

How many, really, shall I recall? The scenes keep tumbling out from memory–Our furtive expeditions, when he was still fit,  to the warehouse at Jericho in search of his favourite Guinness drink, and then later in the evening, along with his disciple, the shaggy-bearded Duro Adeleke, stealing into our dingy pub-cum-restaurant on Iwo road where, after sumptuous ‘lubrications’ and libations to the pertinent gods, the stories would begin to flow out freely from his lips in the half-lit magical ambiance of the night! Or what about that evening preceding the Opening of our Fagunwa performance in Lagos, when on our way to meet the actors, I fell mysteriously into a muck-filled ditch, and he had to fish me half-conscious from the slime, and nurse my broken body through the night of the most excruciating pain I have ever experienced, (yet with both of us reminding ourselves every second that ‘the show must go on’)? Or one other morning when I brought him to bless my new house, and his powerful incantatory prayers, in Yoruba, startled the audience into ecstatic applause…oh, how many, how many indeed shall I recount?

I have to stop unfortunately. But I am picturing him now on his sick bed, on what was to prove our last visit—our small delegation comprising Biodun Jeyifo, Sope Oyelaran, Eileen and myself—watching Mama Jide, his wife, fussing over him, mopping his brow, helping him to sit up or lean back on the pillows that she arranged and re-arranged, and so on. Cradled as he was by such love and tender devotion, how could any of us have even imagined that our friend, though ailing, was so soon to take his exit?

How could I have known that the next time I would see him would be on a cold stretcher at the door of the morgue?  Briefly, kindly, the attendant lifted the blanket for us to see his face. And, ah, I was comforted. Our friend looked strangely serene, at peace with himself. His wife, we learnt, had been feeding him as usual that morning when, in a voice suddenly strong again, he told her, ‘Thank you, thank you very much.’ And closed his eyes.

So, Honest Man, generous to the last, if you can still hear me, I also say, ‘Thank you, my brother and my friend. Pity you had to go, but thank you for the richness you shared with us.’

Why Media Business Is Under Threat – Sen. Chris Anyanwu