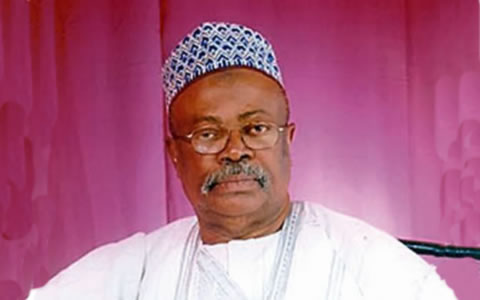 Abubakar Tsav, former commissioner of police in Lagos state, has faulted ex-President Olusegun Obasanjo’s comment on the security situation in the country.

During a press conference on Sunday, Obasanjo had said the security situation deteriorated under the Muhammdu Buhari-led government.

Reacting in a letter, Tsav said Obasanjo goofed on his submission.

The elder statesman said he was shocked that Obasanjo who “laid the foundation for all the problems” bedeviling Nigeria is now criticising Buhari.

Below is the letter:

Let me use this opportunity to wish you and your family a happy, blissful and prosperous New Year, as we pray for God’s guidance and wisdom in the leadership of Nigeria.

I have taken pains as an elder to peruse and deeply reflect on the contents of your recent epistle/address to Nigerians. I strongly feel like most other elders of our great nation that as a Senior Citizen, there is need to reply you by shedding light on some of your attempts to twist facts and the carefully rehearsed tales, least you mislead the younger generation.

First, I must say, I am not impressed with the tone, discourteous and indecorous language of your letter. Even if you are genuinely aggrieved or seek for a better Nigeria as you feign in this open letter, an elder statesman of your status should be more mature in conveying his anger.

Casting unproved aspersions on public institutions is in itself a weapon of anarchy for the youths who are reading/listening to you. We have a moral and religious duty to mentor our children in a manner that would enable them grow up as responsible citizens and leaders.

What better Nigeria do you seek when you fabricate lies and de-market other leaders from a partisan perspective; delivered in a very uncouth language to youths who would tomorrow assume leadership of this great nation?

However, while these issues have been unconvincingly interrogated by you and at some instances, you dispensed yourself more as seeking for personal vengeance than fighting an altruistic national cause; I like to comment on the issue of security and Boko Haram insurgency to be specific.

Let me quickly remind you that whatever perceived loopholes in the administration of Nigeria today had the foundation solidly laid by your government for eight years. It does not make sense for a leader to create a problem and then query another leader for failing to solve it to his taste.

The political infractions as experienced in our democracy today, which you complain loudly were hatched and nurtured by you. The PDP government you headed raised an army of killers, by arming youths and brigands, who gleefully embarked on assassinations or elimination of political rivals.

This culture survived all the years PDP held power and President Muhammadu Buhari’s redemption government is cleaning up the rot or the mess accumulated for 16 years in the midst of distractive obstructions.

It’s unfortunate that indignation has blinded you from noticing the difference. But Nigerians who saw yesterday and are survivors today have seen the positive and remarkable difference, which your malicious letter fruitlessly seeks to diminish.

When I look at what Boko Haram became in Nigeria, the torments; the atrocities or heinous crimes it committed on Nigerians for more than a decade, I feel Nigerians deserve a public apology from you.

It is strange that while you have not convinced yourself to tender a public apology to Nigerians, it smacks of public mockery and assault on our collective sensibilities for you to castigate President Buhari by baselessly plotting to vacate the gains the country has achieved in battling insurgency under his administration.

If you have forgotten, let me remind you that Boko Haram started in 2002 as a small sect of political thugs imported into Nigeria/Borno state from Niger and Chad republics for the reelection project of the then Governor of Borno state.

The band of political thugs who morphed into Boko Haram and led by Mohammed Yusuf felt aggrieved that they were used and dumped after the governorship reelection victory in 2003. And with arms in their possession they initially started as armed robbers and were emboldened by the successes of their exploits and then metamorphosed into Boko Haram.

Sir, the government you led had the opportunity to crush this emergent and fanatical religious sect, but you ignored it. Under your watch, you allowed Boko Haram gain strength and gathered enough momentum to spread its atrocious tentacles in killings, bombings, abductions and destruction of public and private properties in Nigeria. There was no apparent reason to abdicate this sacred security responsibility to the nation. Have you ever reflected on this?

Had you discharged your sacrosanct constitutional obligation of securing lives and property of Nigerians, Boko Haram would have been extinguished at its embryonic stage; it would not have blossomed and President Buhari would not have met it as a major security threat to Nigeria by 2015.

A leader with such records on this scandalous security problem has no moral standing or locus standi to openly disparage the rewarding efforts in curbing Boko Haram under the Buhari Presidency. If it is not malicious persecution, I remember that in your open epistle to President Buhari last year, you commended the President for his efforts in fighting corruption and Boko Haram in the country.

Why the sudden reversal? Could it be genuine confusion or malice or hatred wrapped as national activism or patriotism? To describe insecurity situation in Nigeria today by you, especially Boko Haram as deteriorating is absurd and most uncharitable.

I want to believe your memory has failed you on the precarious security situation and progression of Boko Haram in Nigeria, especially in the Northeast before the Buhari Presidency.

Permit me to refresh your memory. When President Buhari took over the reins of power in May 2015, Boko Haram insurgency had engulfed almost the entire Northern part of Nigeria. The Northeast was under the raging fires of insurgency, with Borno, Yobe and Adamawa states most affected. It reigned supreme and started inroads into Southern Nigeria. But Buhari has halted it.

Also, please recall that insurgents had forcefully annexed and occupied 20 local government areas in Borno state alone, in which they deposed Emirs and foisted the flags of their “Islamic Caliphate,” as insignia of their administrative control unchallenged. Terrorists also had partial control of seven other LGAs in Yobe and Adamawa states. President Buhari has reclaimed all the captured territories of Nigeria.

Insurgents frequent attacks and raids of security formations, villages or communities caused desertion of ancestral abodes by natives, leading to gruesome killings, abductions, destruction and displacement of people. IDPs camps in the Northeast were filled to the brim with displaced persons. With President Buhari’s decimation and defeat of Boko Haram, the situation today is not as grim as it was yesterday.

Most IDPs have gone back to their villages, the devastated Northeast is being rebuilt; over 16, 000 Nigerians held hostage by terrorists have been rescued by the Nigerian Army. And life has gradually returned to abandoned enclaves. No leader honest with himself would claim the security situation on Boko Haram in this region is deteriorating.

I agree with you that the Islamic State’s West African Province (ISWAP) has teamed up with Boko Haram. It is the reason for the resurgence of terrorism in the region in the last two months. But to rubbish every other efforts in this regard or refuse to see the change is unpatriotic and self-serving.

And to falsely claim the Nigerian government is empowering insurgents by payment of ransoms is equal to countering yourself, hence you had admitted this same address that ISWAP pairing with insurgents is responsible for the current upsurge, which is being handled.

I am baffled that as a retired Army General and former Commander-in-Chief of Nigerian Armed Forces you feel satisfied to say the Buhari government has reached the “end of its wit even in handling all security issues , but particularly Boko Haram issue.” But three successive Presidents of Nigeria including you combined could not post the results the Buhari Presidency has displayed on the winning streaks against insurgency.

We all seek to have a peaceful, secured and progressive nation. But to deliberately undermine or rundown an incumbent leader because of our personal grudges is unrealistic, selfish and callous.

I strongly feel President Buhari deserves encouragement to break new grounds on the resurged Boko Haram insurgents and not vilification. In same manner, the COAS, Lt. Gen. TY Buratai and the troops in the trenches deserve kind words of endearments’ from leaders like you for the great sacrifices they are making on our behest.

To understand that this poor outing is emanating from an elder statesman of your caliber is not good account of yourself and Nigeria, a country you once led. You cannot be wrong and right at the same time.

It is better to reassess your public outings, especially on the excitement of -writing open letters because I sense these epistles in which you end up countering yourself most times have outlived their usefulness’.