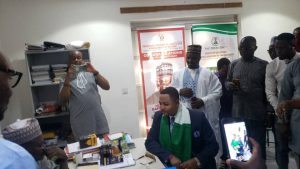 A Chieftain of the All Progressives Congress (APC) chieftain Nicolas Felix has picked the party’s Presidential Expression of Interest and Nomination forms at the International Conference Centre, Abuja.

Felix, who described himself as a successful businessman, philanthropist, and pastor, said he will reposition the country in the post-Buhari period.

Accompanied by his Campaign Director and hundreds of party faithful, the Edo-born [politician obtained the forms at about 4 pm on Thursday.

The 40-year-old last week Saturday officially declared his intention to contest the presidency in 2023.

Unveiling his plans, Dr. Felix described the ruling party as a very prestigious platform and vehicle for federal power in the national interest.