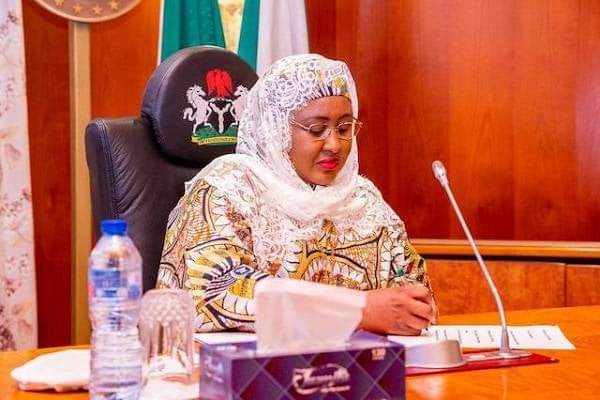 Nigeria’s first lady, Aisha Buhari, has urged political parties to consider women as running mates to candidates contesting elections into various positions across the country.
Mrs Buhari spoke on Saturday night when she hosted presidential aspirants from various political parties to a Ramadan (Iftar) breakfast at the State House, Abuja.
Our correspondent reports that Mrs Buhari had invited all the presidential aspirants, across all political parties, to the Ramadan Iftar.
Some presidential aspirants, who attended the event, held at the State House Conference Center (Old Banquet Hall) Abuja, included, former governor of Lagos State, Asiwaju Bola Tinubu; Governor Dave Umahi of Ebonyi; Governor Bala Mohammed of Bauchi; Minister of Labour and Employment Chris Ngige; Vice-president Yemi Osinbajo, represented by former governor of Edo state, Prof. Oserheimen Osunbor.
Other dignitaries were, Kaduna State Governor, Nasir El-Rufa’i; Minister of Niger Delta Affairs Godswill Akpabio; one-time National Chairman of the People’s Democratic Party (PDP) Chief Barnabas Gemade; former Speaker of the House of Representatives Yakubu Dogara; and oil and gas mogul Tein Jack-Rich were also in attendance.
The event was organised by the first lady to provide opportunity for the aspirants to share love and happiness with one another in the spirit of Ramadan and in a quest for nation building.
Addressing the aspirants, Mrs Buhari, said, fair-play for women in politics was to ensure their greater participation in elective positions.
“ In fact, it is high time women are adopted as running mates at all levels considering their voting strength and active involvement in political processes.
“As we approach the 2023 election with greater hope, I am confident that Nigeria will continue to grow from strength to strength on the pedestal of our democratic tenets”, she said.
The first lady, enjoined the presidential hopefuls to remain focused on issues that strengthened the nation`s unity, brotherhood and national cohesion.
She however, reminded her guests that, the 2015 election was a watershed in the history of Nigeria.
“ It was neither contested in the court of law, nor in the court of public opinion.
“Therefore, the greatest end-of-tenure gift that fellow Nigerians can give to the first family is another free and globally-acknowledged fair election come 2023 “, she appealed.
Mrs Buhari urged all the aspirants to ensure tolerance, fair-play and avoid violent tendencies by building bridges where necessary, especially during electioneering campaigns.
Responding to Mrs Buhari’s charge, Vice-president Osinbajo, represented by Prof. Osunbor, urged all aspirants to play politics without bitterness.
Osinbajo said the event offered Nigerians from different faiths and background the opportunity to reunite with one another to foster unity.
“ It is an opportunity for aspirants from various political parties to meet one another and the lesson we should learn from here is to practise politics without bitterness as we move closer to election year.
“We should try to imbibe the spirit of oneness because at the end of the only one person is going to emerge winner of the Presidential election next year. So, it is not going to be do-or-die affairs, we should learn to practise politics without bitterness, ’’ he said.
One of the APC aspirants, Asiwaju Bola Tinubu, expressed gratitude to the first lady for bringing the diverse groups of Nigerians to share love and unity.
Tinubu, however, prayed for brotherliness, peace, unity and prosperity of Nigeria.
On his part, Gov. Umahi expressed appreciation to the first lady for bringing the presidential aspirants together to foster unity and nation cohesion.
Also, Gov. Bala Mohammed, said the gathering was historic going by the calibre of people in attendance.
Mohammed promised to play the game with humility and mutual respect.

Imo: Over 100 lives lost in fire at illegal refinery