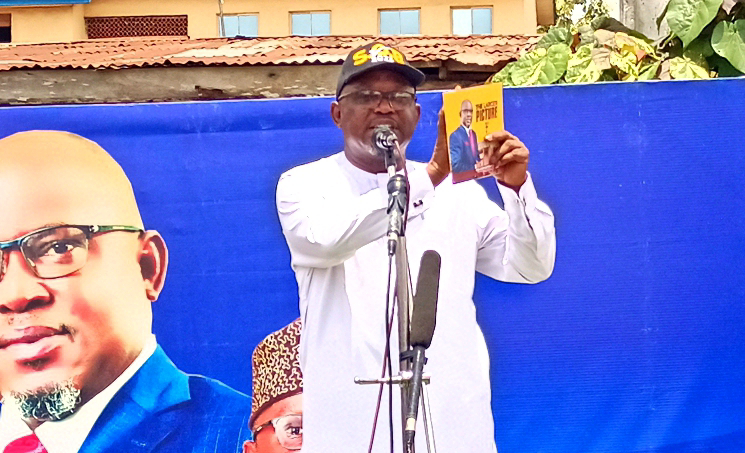 Lagos Majority Leader, representing Ikorodu Constituency 1 at the Lagos State House of Assembly, Hon. Sanai Oyeniran Bolanle Agunbiade has presented his score card to his constituents with a promise to attract more dividends of democracy to the area when given another opportunity to serve.

Speaking at a well attended gathering in his Constituency office, Ikorodu, Lagos, Agunbiade announced his intention to run for the 2023 Assembly election under the platform of the All Progressives Party (APC), stressing that he is seeking re-election for larger picture and to consolidate on achievements recorded as a member of the House.

The lawmaker, who is the Opomulero of Ikorodu kingdom, disclosed that over the years as the representative of the people of Ikorodu Constituency 1, he had attracted so many projects that cut across all sectors of the economy, adding that he was determined to do more in collaboration with members of the assembly and Governor Babajide Sanwo-Olu.

Agunbiade further noted that the voice of the people of Ikorodu Constituency 1 was very pronounced on the floor of the state assembly as he had sponsored bills and motions as well as contributed qualitatively to debates where the interest of the constituents were canvassed.

He also disclosed that he had embarked on a good number of empowerment programs to uplift the socio-economic standards of the people, saying that he has facilitated the employment of about 110 constituents, saying that providing a sustainable means of livelihood was his hallmark.

The erudite lawmaker, while canvassing for understanding and cooperation of the people of Ikorodu Constituency 1 over his aspiration for fifth term in office, recalled the past supports that brought him thus far, assuring all that he would always respect the confidence reposed in him by the people.

Agunbiade also called for the unflinching support towards the second term bid of Governor Babajide Olusola Sanwo-Olu of the state, describing Sanwo-Olu’s re-election as Governor and his return to Lagos State House of Assembly as divine and should be widely supported.

In the same vein, the lawmaker equally canvased for the candidacy of Asiwaju Bola Ahmed Tinubu as the President of the Federal Republic of Nigeria, adding that Tinubu has the capacity, courage and leadership quality to rule Nigeria.

A leader of the party in the area, Primate Charles Odugbesi, while responding to questions, acknowledged the immense contribution of Hon. SOB Agunbiade to the development of Ikorodu Constituency 1, and urged the people to take his re-election bid into the State House of Assembly as a challenge for peace and greater growth of the Constituency.

Others who spoke at the event said that Agunbiade had provided quality representation for the people, maintaining that he deserved a fifth term to consolidate his success stories in the area.

They reminded all that APC is one big family, stressing the need for aspirants to shun blackmails in their campaigns.

The high point of the ceremony was the handing over of a 25 paged booklet containing the scorecard of Hon. SOB Agunbiade as a member of the Assembly to all stakeholders in attendance.