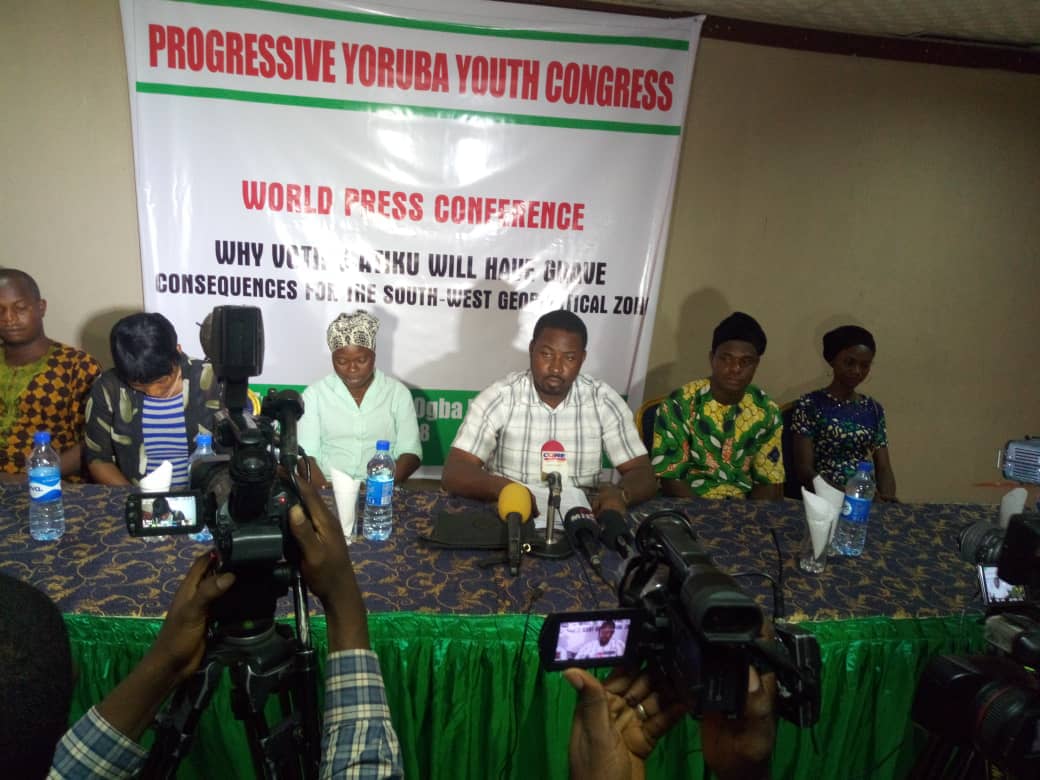 The Progressive Yoruba Youth Congress (PYYC) has warned the southwest zone against voting the presidential candidate of the Peoples Democratic Party, PDP, Atiku Abubakar in the 2019 general elections.

The youth group warned that voting Atiku and the PDP into power will have grave consequences for the south west geo-political zone between 2019 and 2023.

According to PYYC the PDP government, under the last PDP-led federal government, the South West geo political zone was completely neglected.

Kola Salawu, the National President while speaking at a press conference on Tuesday, decried that the southwest region, which has the second highest number of registered voters and highly intellectual professionals, was denied any meaningful position in the top hierarchy of political office holders.

He recalled that at some point, there was nobody from the South West region occupying any of the top ten positions in the Country.

According to him, “The South West through its major political leaders decided to act. They pushed for alliances with other political parties across the Country to form the new All Progressives Congress (APC). They mobilized the South West to vote the new party which ultimately resulted to victory the APC at the polls.

“Let us not forget that the neglect by the PDP was not only political but also infrastructural. The party for whatever reason barely completed or even carried out any major project in the South West. The Lagos – Ibadan express way, the busiest in the country was abandoned. The Benin – Ore expressway was equally abandoned, so also was the Oyo- Ogbomosho road, there was barely any federal presence in the South West.

“The APC led Federal Government has 68 ongoing road projects in the South West alone amongst the road projects are; Lagos-Ibadan, Lagos- Abeokuta, Oyo -Ogbomosho-Ilorin. 36 power projects in the South West region within the last three years. The Lagos – Ibadan railway project is billed to be completed by December 2018 as work is ongoing on the site day and night with over 2,000 people employed directly or indirectly on the project. It is obvious to all that there is a huge difference in what the South West got under the previous PDP government and what they are getting now.

“The master stroke was the recognition of June 12 as Democracy day and the Honor given to Chief MKO Abiola. Even the Obasanjo government refused every appeal to have this done.

“To our amazement, when the PDP were going to have their convention in 2017 to pick their new party executives; the party agreed to zone the party chairmanship position to the South West but alas, that did not happen, the position was given to the South- South. After their party presidential primaries where Atiku Abubakar emerged candidate, he picked Mr. Peter Obi from the South East geo-political zone as running mate.

“It became obvious again that the party was not repentant and was going to treat the South West with the same disdain it has always had. It was reported in the news media that the PDP has decided to give the position of Secretary to the Government of the Federation (SGF) to the South West.This must be very laughable and as our people say “we cannot compare a man sleeping with a dead man” that is a perfect description of both offers

The Southwest cannot leave what it has with the APC currently for the far watered down version promised by the PDP. The Southwest will not only reject the PDP and its candidate Atiku Abubakar but it will also campaign and vote for Mohammadu Buhari and the APC. The South West will not go back to oblivion again. All good people of the South West must rise up to protect this ongoing progress and support the one who has brought development to the region.

“We must also remain politically vigilant. When President Buhari’ s tenure ends in 2023 after he wins the 2109 elections, Power will return to the southern part of Nigeria and that is just some four years away. We never can tell what will happen then as the highest ranking person in this government from the south is no other but His Excellency the Vice President, Prof Yemi Osinbajo. It may just be his turn.

“We urge all sons and daughters of the South west of Nigeria to be politically awake and choose wisely in the forth-coming elections as the decisions we make will determine if the region will continue to enjoy the true benefits of good governance or we go back to the days of total neglect.

“The difference is as clear as crystal, we must work hard to return President Buhari in the 2019 general elections. Long live the federal republic of Nigeria!

Asiwaju Tinubu Did not Grant Any Interview to AIT on 2019, Says Tinubu’s Media Aide