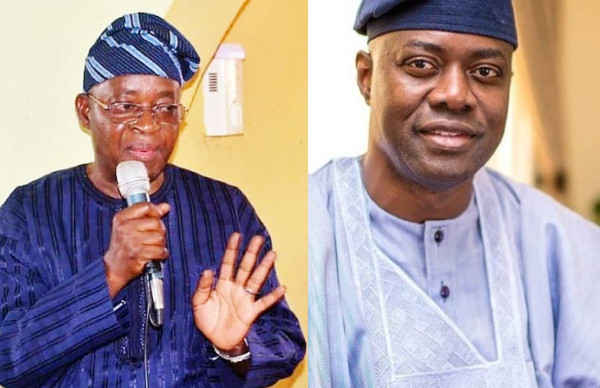 Governor Gboyega Oyetola of Osun State on Friday September 6, warned Oyo state Governor Seyi Makinde against inciting the staff of the Ladoke Akintola University of Technology (LAUTECH) and the people of Oyo state against the government and people of Osun state, following his comment of Osun state government not fulfilling its obligations in the running the University jointly owned by the two states.

In an interview with BCOS TV on his first 100 days in office, Makinde had said he won’t shy away from splitting the institution as it is “very important to Ogbomosho”. He further explained that an agreement to split the institution was signed during the administration of Adebayo Alao-Akala (Oyo) and Olagunsoye Oyinlola (Osun), but never implemented.

“Yesterday, the governing council came to see me and we discussed all these. We’ve signed for worker payments but since it’s owned by both Osun and Oyo states, unfortunately, Osun state has not paid. This can not continue,” Makinde said.

“A few days ago, I spoke to the Osun governor, Gboyega Oyetola, the plan to split was signed between Akala and Oyinlola but we don’t know why it wasn’t implemented. Oyo State will have to pay the salary of LAUTECH (Osun’s share) because I don’t want the students to suffer.

“If we have to split up, then so be it, I won’t shy away from this divorce. LAUTECH is very important to Ogbomoso.”

However in a statement released on behalf of the Osun State Governor by the Supervisor of Ministry of Information,  Adelani Baderinwa, Governor Oyetola accused Governor Makinde of playing a greedy man’s script. He added that they are aware of Makinde’s campaign promise of acquiring LAUTECH and making it the property of Oyo government alone.

He also advised the Oyo State Governor to take a “rational path before making any statement on LAUTECH matter.”

The statement reads in full;

The attention of the State Government of Osun has been drawn to a statement credited to Governor Seyi Makinde of Oyo state on his official twitter handle where he frivolously accused the state government of not paying the salary of workers of the Ladoke Akintola University (LAUTECH), Ogbomoso.

We will like to state that for 29 years of existence, Osun Government has been living up to its expectations and performing his responsibility as an equal partner in the LAUTECH ownership, notwithstanding the obvious cheating from the Oyo government.

Governor Seyi Makinde needs proper briefing and extensive readings on LAUTECH before he could make factual and objective remarks. Presently, he obviously does not have sufficient facts or may be playing greed man script. And as a matter of fact, we are aware that the governor had during his campaign promised to acquire LAUTECH and makes it the property of Oyo government alone. We are not surprised that he started on a wrong note of blackmail on the university matter.

However, Governor Seyi Makinde needs to be properly informed that Osun government does not owe LAUTECH workers’ salary since it took over the payment in July this year. What is outstanding is the August subvention which is being arranged alongside other statutory expenses of Osun government. It is unpleasant that Governor Makinde took to his twitter handle in an attempt to make a cheap political point on Osun. That is unbecoming of a governor.

When owner states were asked to pay N500m each for take-off after the visitation panel, Osun duly paid its own, but we are yet to have evidence of payment by our boasting counterpart.

Governor Seyi Makinde should be worried on why LAUTECH has not been self-sufficient in terms of funding and academic advancement since its creation, while Osun State University which was created a few years ago is making ways financially and academically.

We expect Governor Makinde to rise above the petty game of blackmail and attempt to incite the LAUTECH Workers and the Oyo people at large against the government of Osun and the administration of Governor Gboyega Oyetola who is very responsive and committed to workers plight.

It is a known fact that Oyo had always wanted to own LAUTECH alone but it is our common patrimony and nobody can appropriate it through blackmail or whatever. Osun is not in any way forcing itself on the joint ownership of LAUTECH. The supposed ‘plan to split’ signed by former governor Olagunsoye Oyinlola and former governor Alao Akala was a ruse. There is a legal and sincere process to be followed if Oyo state is indeed interested in taking over LAUTECH. Osun government will be happy if Governor Makinde initiates that process.

Osun has always been cheated on LAUTECH: only one (1) out of the eight (8) academic faculties is in Osun, while Oyo has about twice of the staff strength of the University. Osun single-handedly funded the infrastructure development in the LAUTECH campus in Osun; also 85 per cent of the total institution’s infrastructure is in Oyo, whereas funding is equally carried out. Despite this, we are fully committed to joint ownership of our joint heritage.

Governor Oyetola who is passionate about functional education, a team player and a goal-getter will not cease in funding LAUTECH.

The amiable Governor Seyi Makinde is urged to take a deeper and more rational outlook at the matters of existence and operation of LAUTECH, otherwise, he will get lost in the shenanigans of LAUTECH OWNERSHIP AND CONTROL. Oyo has been a great cheat on Osun in this matter and only a dispassionate and discerning mind can deductively make good sense out of the situation. GSM is thus advised to take rational path before making statements on LAUTECH matter.

Badoo boys is a creation of the media, killings in South-West is exaggerated – Former Police Commissioner Fatai Owoseni