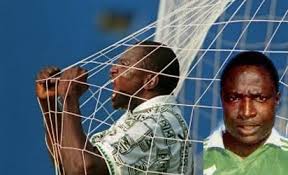 She said she wants Nigerians to understand that the former Super Eagles striker did not die of mental ailment.

Omoyemi, a 200 level English student of University of Ilorin, said this in an interview with Punch, adding that her father’s fame had not affected her lifestyle in anyway.

She said, “He was such a special father; every day with him was memorable. I still remember him taking me along for his football trainings; I loved spending time with him. Whenever I was on holiday, he ensured I never left his sight.

“I was quite young then, so I didn’t really understand the fame that came with having a famous footballer as a dad. I also didn’t understand how much people valued him. I began to understand things as I grew older.”

Asked if her father’s name has opened ways for her, she said, “No, probably because I live a normal life. Many people don’t believe me whenever I tell them I am Rashidi Yekini’s daughter. I don’t go around flaunting his name. I try as much as possible to live a normal life.

“If my father was alive he would want people to know that he was normal and that he didn’t have a mental disorder. He wasn’t ‘crazy’ before he died, as some people claimed. He would have loved it if people treated him like a normal person. He would also have wanted people to appreciate him for his great impact in Nigerian football history.”

She added that it was not necessary for Government to waste their time investigating the cause of the former football star, adding that knowing what killed her father will be of no gain.

Omoyemi added, “Honestly, I’m not interested in any investigation, but I’ve not heard anything about that. The fact that he is dead is hard to take. I would want to know how he died, but what would I gain from it? It would not bring back my dad; he is gone.”

Asked if the Nigerian Government has redeemed its pledge on the Rashidi family, she said, “This is the first time I am hearing such; I never knew about that promise. Maybe my father’s lawyer would know about. But I know nothing about any house.”