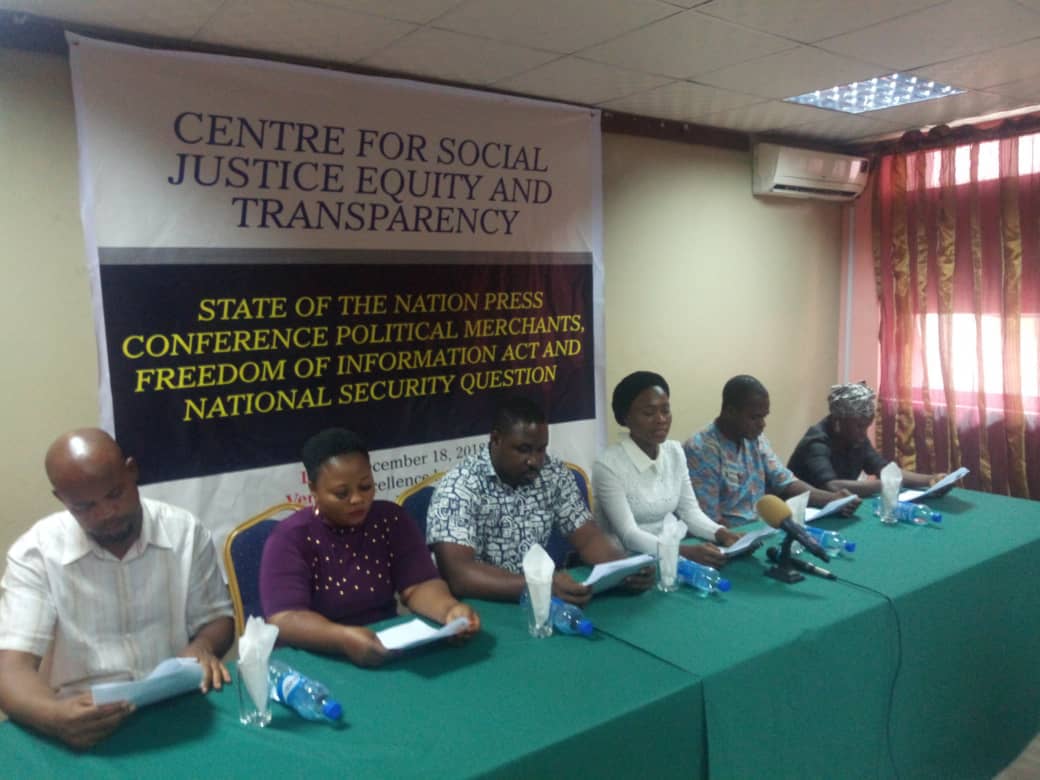 The group has questioned the likes of Socio-Economic Rights and Accountability Project (SERAP), Enough is Enough (EiE), and BudgIT who raised false alarm over the Army’s budget implementation in the last three years.

According to CESJET, these groups have no moral right to enquire into the military’s activities, especially as they are known to be sponsored by external fraternisation to destabilise the progress.

This was made known by Barrister Gbemisola Osaloni it’s Executive Director, in a press conference on Tuesday in Lagos.

Instead of indulge in falsehood CESJET, however, advised these group to visit the Theatre of Operations to get the needed information.

“ The Centre for Social Justice, Equity and Transparency (CESJET), a civil society organisation at the vanguard for social justice and transparency in Nigeria, herby condemn in its totality the questionable call for the 2015, 2016 and 2017 budget implementation reports of the Nigeria Army by the Socio-Economic Rights and Accountability Project (SERAP), Enough is Enough (EiE), and BudgIT,” Gbemisola quiered.

“CESJET as a first frowns at such a request coming from groups that are known for external fraternisation in the funding of their activities.

“ CESJET wishes to use this medium to inform the members of the unsuspecting public that the trio of Socio-Economic Rights and Accountability Project, Enough is Enough and BudgIT might be carrying out a script from their oversees donors that have continually funded their operations, but hiding under the umbrella of advocates for transparency and good governance.

“In the years that civil society organisations crisscrossed North East Nigeria to demand better welfare for troops and as well as demand for transparency in the operations of the Nigeria Army, SERAP, EiE and BudgIT distanced themselves from such activities. Instead, they rely on desk research and hearsays when issuing statements.

“ CESJET also wishes to use this medium to challenge SERAP, EiE and BudgIT to undertake a trip to the Theatre of Operations to get the needed information as this would constitute a primary source of information.

“CESJET rejects the destabilizing moves by these organisations that know little or nothing about military operations in warfare. So to demand for budget implementation reports is not only an act of ignorance, but an attempt to cause a distraction which is most uncharitable in timing and intent.

“The likes of SERAP and BudgIT get their funding from organisations based outside the shores of the country and as such, it would not be farfetched if part of the payback would be to cause a distraction such as this in an attempt to create unnecessary tension in the polity.

“CESJET also views the call as against National interest and must be resisted by well-meaning Nigerians. Nigeria must question such a request that is capable of jeopardising the efforts of the Nigeria Army in its ongoing operations across the country.

“Furthermore, the information requested would not serve the national interest, public welfare, public interest and peace, human rights, good governance, transparency and accountability. But instead, it would advance the interest of their paymasters that are hell-bent on destabilizing Nigeria.

“The gains recorded by the Nigeria Army in the past three years are there for all to see especially in its operations in North East Nigeria and other parts of the country.

“CESJET wishes to state that it is appalling and a national disgrace on how SERAP, EiE, and BudgIT have allowed itself to be used against the interest of the country, probably in return for improved funding of their operations in the new year.”

2019: Coalition for Nigeria reveals how Atiku, Russia are partnering to rig presidential polls