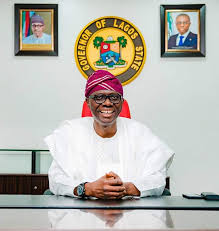 With 1,170 delegate votes in his favour, Governor Babajide Sanwo-Olu won the governorship primaries of Lagos State’s chapter of All Progressives Congress (APC) to become the party’s standard bearer in the 2023 general election.
The party members defied the downpour that marred the exercise held on Thursday at Mobolaji Johnson Arena in Onikan; they filed under the rain and cast their votes to approve the Governor’s second term ticket.

The electoral process commenced at 12:33pm with the arrival of the chairman of the Lagos Gubernatorial Primaries Committee led by the former Deputy Governor of Borno State, Alhaji Adamu Shettima Yuguda.

The electoral committee’s arrival was followed by immediate accreditation of delegates across the 20 Local Government Areas (LGAs).

Of all the 1,225 delegates expected to participate in the primaries, the electoral committee accredited 1,198 delegates seated at the venue.

The exercise was witnessed by officials of the Independent National Electoral Commission (INEC) dispatched from the commission’s headquarters to monitor the primaries.

Before voting commenced, Shettima explained the modalities adopted by the electoral committee on how the delegates would cast their ballots.

He said: “This exercise we are conducting here is to renew the mandate of the APC government in Lagos. We bring greetings from our national secretariat. Lagos is an APC state, no other party should be allowed to govern the State because our party has done extremely well.

“Lagos is very important to APC, because the next president is most likely to emerge from this State. This exercise is important, no matter how long we are here, we must be patient because this is what the electoral laws mandate.”

At 1:03pm, accredited delegates filed out to vote according to their Local Government Areas. There were five delegates each from 245 wards across the 20 federally registered LGAs.

The voting was temporarily disrupted by the downpour. When the rains subsided, the delegates came out again to vote.

At 3:35pm, the voting ended and sorting of the cast ballots began immediately. Then, the electoral committee chairman declared vote counting.

Having garnered the highest votes, Shettima returned Sanwo-Olu as winner of the process, stressing that two other aspirants who were supposed to contest in the primaries had been disqualified by the party’s screen committee prior to the exercise.

Reacting to the outcome of the primaries, Sanwo-Olu dedicated the victory to all party members, describing them as the main winners of the exercise.

The Governor said the outcome of the exercise was a “loud and clear” message from the party delegates, noting that his victory was the first leg of the success being expected by the State chapter of APC. He said the party leadership would not divert all its energy to win the APC presidential ticket for the party’s National Leader, Asiwaju Bola Ahmed Tinubu.

Sanwo-Olu said: “Having thanked all our party faithful, the bigger appreciation goes to all Lagosians irrespective of the side they lean. This victory is for all residents who have supported us on this journey we started four years ago. What we witnessed this evening is an affirmation that the good work we have been doing should continue.

“This is the assurance we are taking to the general elections and we will ensure that we don’t fail. With all sense of responsibility, there are still a lot more that Lagosians should be expecting from us across all facets of governance. The confidence reposed in us will not be betrayed. We pray that God gives us the energy to take Lagos to a level that will reflect the aspiration of all Lagosians.”

Other members of the Gubernatorial Primaries Committee who were at the exercise are the Secretary, Dr. Mohammed Bashir, Tilewa Sijuwade, Hon. Bola Imolehin and Stella Okotete.

2023: Sanwo-Olu Will Begin New Phase Of Development In Lagos