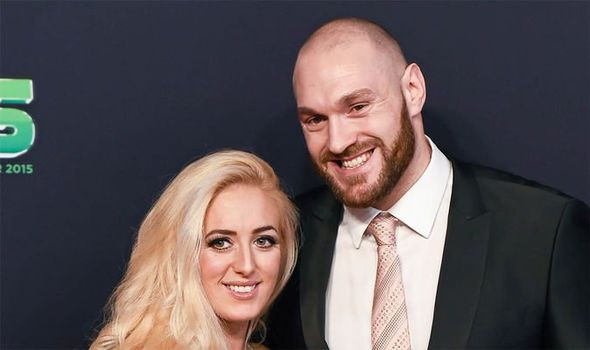 Paris Fury, wife to Heavyweight Boxing champion, Tyson Fury, has come out to publicly appeal to her husband to retire from the sport after he fights Anthony Joshua later this year.

Fury could meet Joshua at the end of the year if Joshua beats Kubrat Pulev this June and if Fury beats Wilder in a rematch this July, as both fighters aim to decide who should be crowned the king of heavyweight boxing.

Paris who is also the mother of Fury’s five kids says she and her husband have spoken about the risks involved in boxing, and she wishes he retires undefeated after beating Joshua than continue in the sport in search of more fame and money to the detriment of his health.

Fury’s boxing record so far includes 30 wins and one draw, a controversial judges’ decision in his first fight with Wilder while Joshua’s record includes 23 wins and one loss, a shock defeat to Andy Ruiz Jr. that he revenged in a rematch in December.

Speaking in an interview with the Daily Mirror on Sunday, Paris said: “I’d like him to beat Anthony Joshua and then stop.

“He’s in the ring with supreme boxers and it is a dangerous sport. We both know the risks.”

Fury currently holds the WBC and lineal titles, while Joshua has the WBA, IBF, WBO, and IBO titles.

Paris continued: “If they put all the belts on the line it would be such an amazing fight.

“I’d like him to take that one fight and retire undefeated.

“He can’t go on forever, he can’t go undefeated forever. I wouldn’t like to see him continue for too long and get hurt.

“I wouldn’t like to see him lose his record chasing money or fame. He doesn’t need that.

“He’s already cemented his name in the history books.”