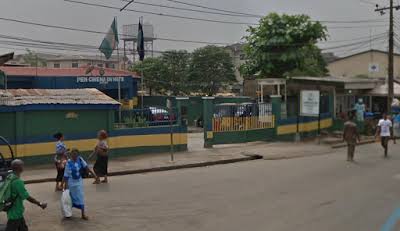 An 18-year old girl, Kemi Adeshina, has landed in trouble after she allegedly aided the escape of her 26-year old lover, Damilola Abiodun, who conspired with other suspected criminal elements to burn down Pen Cinema Police Station, Agege, Lagos.

Kemi, was later arrested with her lover, Damilola Abiodun, for conspiracy, armed robbery and arson, which if found guilty in Court will be liable for life imprisonment.

The incident happened on 21st October, 2020, during the #EndSARS protest when many Police Stations and properties were destroyed across the States.

According to Police source, Abiodun and others now at large, armed themselves with guns and other dangerous weapons, stormed Pen Cinema Station and released a criminal suspect, one Ahmed Yusuf, then looted the place and carted away Police equipment.
Thereafter, they used petrol to set the Station on fire alongside vehicles and other exhibits parked there.

Since that incident, the Police have been looking for Abiodun, who was using his lover, Kemi, to mislead the Police in order to escape arrest.

However, the Police eventually arrested both Abiodun and Kemi and charged them before the Ogba Magistrates for the alleged offence.

The Court could not release them on bail following an application from the prosecutor, Mr. Femi Adeleye,  who asked the Court to refer the matter to the DPP for advice.

Hence, the Presiding Magistrate, Mrs. H.B. Mogaji, ordered their remand in Correctional Centre pending the outcome of the DPP’s report. She then directed the prosecutor to duplicate the file and send to the DPP for advice.

The lovers will remain in custody pending when the DPP’s report will be ready in order to determine if the matter will be transferred to the High Court or not.

Billionaire Businessman, Bolu Akin Olugbade Bows Out At 64, Details Of His Last Moments