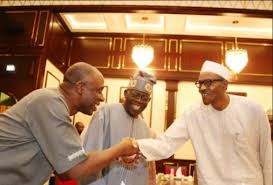 The founder and anchor of The Osasu Show, Osasu Igbinedion, has debunked social media reports claiming a national leader of the All Progressives Congress (APC), Bola Tinubu, urged Nigerians to reject the party in 2019 on her programme.

The reports also claimed the Minister of Transportation, Rotimi Amaechi, called on Nigerians to criticise the activities of the party while appearing on her show which aired on African Independent Television last Friday.

Ms. Igbinedion said the reports were untrue as neither Mr. Tinubu nor Amaechi featured on her show last week.

“While we have indeed interviewed many eminent Nigerians such as President Buhari, the Senate President, Dr. Bukola Saraki, Governors, Ministers and other personalities on the show which airs on 9 a.m. on Fridays on AIT, 7.30 p.m. on Sundays on Ben TV London, 8.30 p.m. on Mondays on ITV Abuja and Tuesdays at 7 p.m. on ITV Benin, we have not yet interviewed Asiwaju Tinubu,” Ms. Igbinedion said in a statement.

“Mr. Amaechi on the other hand spoke to us in an exclusive interview sometime in 2016 about matters relating to Rivers State Politics. Of course, it will be a great honour to feature the former on our show.”

The TV show host urged Nigerians to ignore the reports and wondered why those behind the circulation of the fake news decided to target her programme for their inordinate mission.

Why passage of Nigeria’s 2018 budget is being delayed – Official