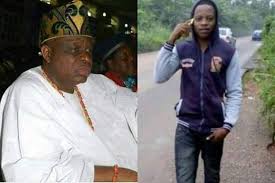 30-year-old Togolese cook, Sunday Anani, charged with the murder of the Chief Executive Officer of Credit Switch Ltd, Chief Opeyemi Bademosi, yesterday Tuesday May 21st, asked the Lagos state High Court in Igbosere to grant him a plea bargain agreement with the government.

Recall that 67-year-old Bademosi was stabbed to death at his home in Parkview estate, Lagos state in October last year. Anani fled the scene of the incident and was later arrested in his hideout in Ondo state.

At the commencement of proceedings on Tuesday, Anani’s counsel, the Director of the Office of the Public Defender (OPD), Mrs Aderenra Adeyemi, informed the court of his decision to a plea bargain. Adeyemi told Justice Mobolanle Okikiolu-Ighile that Anani would be opting for a plea bargain deal and that the defence had approached the prosecutor, Lagos State Director of Public Prosecution (DPP), Ms Titilayo Shitta-Bay, to that effect.

Meanwhile the wife of the deceased, Mrs. Ebunoluwa Bademosi, yesterday, gave her own account of what transpired on the sad day her husband was gruesomely murdered. Mrs Bademosi told the gory story of how she returend from work to find her husband in a pool of blood.

“I went through the kitchen door to gain access to the building. The kitchen door was locked. I knocked several times, calling on the defendant (Anani), but he didn’t come to open the door. My husband’s bedroom and the kitchen door was a distance, so I felt he (Anani) must be doing something for him, so I waited by the kitchen door, for a while. While i was waiting, I got a call from my sister, at Ibadan and we spoke for about 5-6 minutes. ’At some point, I brought out my phone from my bag and called my husband, I realised that the phone was being picked but he was not responding. I called him twice and it was the same thing. It was showing minutes counting but nobody was talking.

Mrs Bademosi said she immediately suspected something bad had happened.

“I entered the apartment. By the time I got in, I looked up and saw blood flowing out of my husband’s bedroom. I couldn’t enter my husband’s bedroom because the door was only partially open but I could see his body lying on the floor. I wasn’t sure of what could be happening inside the bedroom, so, I ran out of the building and started screaming, calling neighbours to help. A couple of people came. I told them to go up and check that something was happening, that I didn’t know what exactly it was” she said

Mrs. Bademosi told the court that she ran to the gate and asked the security man,

“Where is that guy that oga brought into the house? What is happening? Who is inside the house?”

The guard said the defendant informed him the deceased sent him on an errand.

“People started coming, my next door neighbours and her driver were going upstairs and I followed them but i stood at a distance. They came out and said he was gone (sobbing), my husband was gone, and the defendant was not inside the house, then i passed out. When I woke up, I saw a crowd around me, inside the house, my husband’s corpse was lying down there. They took me downstairs because they didn’t want me to see the corpse. The police later came and took his corpse in an ambulance, he was buried on November 21, 2018? she said

Mrs Bademosi refuted claims that she had a strained relationship with her deceased husband.

“I had a very cordial relationship with my husband. I cooked for my husband”.

The case was adjourned till June 11 for continuation of trial.