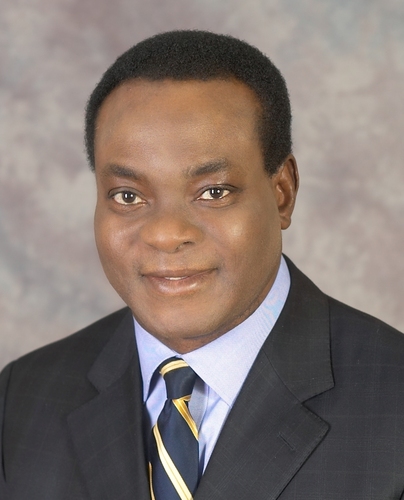 As the race for the 2019 general elections becomes hotter, different political gladiators are making their intentions known and selling their candidature to the Nigerian masses as the whole thing would still be determined on the basis survival of fittest.

For those, whose eyes are on one public office or the other, no stone should be left unturned to position oneself for elective offices that would last another four years starting from 2019.

Probably some might see some offices as tall dreams, especially that of the president of the country at a time the incumbent President Muhammadu Buhari of the All Progressives Congress has technically declared his interest to go for a second term in office.

But for Dr Johnson Edosomwan, the highest political office in Nigeria is up for grasp and it would go to whoever God wishes regardless of power of incumbency or political party of choice.

Having grown up most part of his life an orphan, Dr Johnson Edosomwan has indeed come a long way.

Edosomwan has announced his interest to vie for the office of the President of Nigeria under the Nigeria Democratic Congress Party (NDCP).

Despite the fact that his party remains relatively unknown, Edosomwan is confident that the future belongs to NDCP as he has had to battle poverty to get to where he is today.

To him, nothing is impossible under the sun, “it is achievable once there is determination,” he would say.

He recalls, “I grew up in poverty not knowing my father who died when I was less than two years old and my mother became ill soon after. I worked as a house maid, going to school hungry and borrowing books for my classes.”

He recalls further, “I was however saved at age 10 from poverty and misery and at 17, I moved to the United State of America. When I came to the United States, I had $1400 in my pocket, worked as a dishwasher, housemaid, a newspaper deliverer and much more.”

But that did not dither young Edosomwan. In the United States, he struggled to earn enough money to begin his undergraduate studies at Miami-Date Community College. From there, he earned his BSIE and MSIE from the University of Miami and went on to receive his Doctor of Science in Engineering Management and Economics from the George Washington University and Professional Engineering Degree from Columbia University.

It was indeed a new dawn for young Edosomwan. “I saw a bigger dream. I saw a purpose in life. I saw that I had to play a role in life.”

That was how the journey to serve humanity started for Johnson Edosomwan. Focusing on leadership and management development, he obtained one lofty feat after another and before long, he emerged a force to be reckoned with from local neighbourhood and today, to many nations.

“I always knew that development was key to progress and the engineering knowledge and ability in me opened new doors just as technology did.” Seizing the opportunity that America created, Edosomwan grew. He became a pioneer in Leadership and Management Development, Reengineering, Quality, Productivity, Customer Satisfaction, Innovation and Technology Management, Diversity Management and much more.

As an executive coach and principal consultant, Dr. Edosomwan is known to have helped over 6,000 organizations in numerous countries. He is credited for the development of over 425 performance and improvement tools [and is the developer of the EBAT Performance Excellence Tool.

He recalled how tears welled up his eyes when in May 2014 in Fairfax, Virginia, his citation was read when the Board of Trustees of Virginia Union University conferred on him the highest honour, the honorary Doctor of Divinity Degree, for ministry, leadership, accomplishments and contributions to humanity and to the world.

“It was there that I heard that I had contributed in development work in several continents. I also learnt that I have over 175 awards including, “Men of Achievement in the World,” “Who’s Who of Intellectuals,” and “Who’s Who in Distinguished Leadership. That is enormous. I didn’t even realise it. Mine has been to continue doing the good to humanity.”

Asked how many publications he has to his credit, Dr. Edosomwan simply replied, “That I am fully aware of. I have authored and edited over 68 books and holds over 16 certifications in several academic disciplines.”

On marriage Dr. Johnson Edosomwan said he has been well favoured.

“I am happily married to Mary Edosomwan, who has been a partner of substance to me. And we have two adult children. He believes that his family life has also blessed his Christian ministry and today Dr Johnson Edosomwan ministry contributions include planting churches for the salvation of souls and implementing programs to help the needy around the world.

“As a Reverend gentleman, he has been the host of “Life Solutions,” “Extraordinary Connection with God,” and “Sunday Worship Hour” radio programs, and can be seen regularly on One God TV, “Wisdom for You.”

Dr Johnson Edosomwan who has made influential strides into political terrain in Nigeria also made known his interest to fly the kite of Nigeria Democratic Congress Party (NDCP), a political party he founded, to vie for political office in the country.

But why an interest in this regard. we asked. His reply: “My vision is to unify and transform the Federal Republic of Nigeria into a world-class democratic nation where every citizen contributes and lives peacefully in safe and secure communities free from corruption, poverty, violence, regionalism, and tribalism; into a modern nation that provides access to jobs, clean water, clean air, electricity, infrastructure, education and health care; into a forward-looking nation whose multi-dimensional and robust economy eagerly awaits the coming technology age; and into a prosperous nation that will make our citizens and Creator proud.

Already used to an environment of peace and procedure, Edosomwan says he believes that Nigeria can be turned into a developed world with his leadership guidance which has had good results in other countries. And these he stressed out in a manifesto that beautifully takes into immediate overhaul of economic growth, environment and infrastructure, community women and youth empowerment, education and health care, good governance and foreign policy.

He aims to do more: “I will reassess the educational system and incorporate world-class best practices from multiple disciplines that support the jobs of tomorrow. Establish vocational training and train-to-work programs across the country.  Offer free trade and technical education and encourage tuition reimbursement at universities. Implement a single-payer universal healthcare system for all citizens.  Reduce healthcare burdens on families by offering national assistance for the elderly and persons with disabilities Implement regulations requiring businesses to accommodate persons with disabilities, fight corruption, strengthen institutions to hold everyone accountable to the full extent of the law.”

Moreover, he intends to increase productivity and transparency of government institutions, re-engineer government work processes to reduce waste and increase efficiency and productivity, provide world-class military training for our troops and invest in modern defense and cyber security systems, cooperate with other nations and word organizations and strengthen positive, mutually beneficial relationships, create fair and equitable tax and financial plans that encourage foreign investment. The success of all these can however only be determined by time.

Edosomwan has been able to carve a niche for himself amongst his contemporaries. He believes that all the strategies God has helped him to embark upon to achieve greatness would be useful to Nigeria, a nation begging for visionary leaders that could turn her fortunes around on all fronts and put an end to the malaise of problems bedeviling her as a nation.