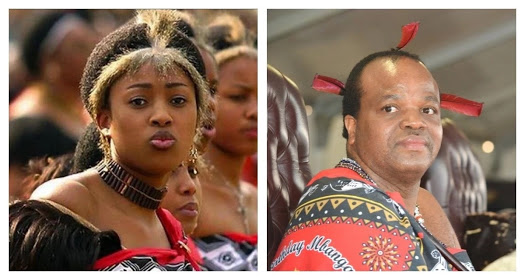 Masango, who was known as Inkhosikati LaMasango –was found dead in the early hours of last Friday. She was buried on Sunday morning.
King Mswati III chose Masango as his eighth bride in September 1999, when she was only 18.
It soon emerged she had a record for truancy, poor grades and she was a high-school dropout and a rebel.
Last year, King Mswati III, married his latest bride, Ms Siphelele Mashwama, who was aged 19 years.

It is a tradition for the Swazi King to choose a wife every year.
The Sherburne-educated king choses a new bride during the famous Reed Dance ceremony, also known as Umhlanga.
The Reed Dance ceremony is an annual Swazi and Zulu tradition held in August or September.
In Swaziland, tens of thousands of unmarried and childless girls and women travel from the various chiefdoms to participate in the eight-day event, and would-be brides are publicly checked to ascertain their virginity.
The Kingdom of Swaziland is one of the world’s last remaining absolute monarchies.

King Mswati III was crowned in 1986 at the age of 18, succeeding his long-serving father King Sobhuza II, who died at the age of 82.
The king, now aged 50, who is known as Ngweyama – the lion – has many wives and often appears in public in traditional dress.

Swaziland, according to Unicef, has the highest HIV/Aids prevalence rate in the world.
Some 210,000 Swazis were living with the HIV infection.
The kingdom with a population of 1.2 million, ranks 112 out of 131 on the 2016 Global Hunger Index.
About 77 per cent of the Swazi population relies on subsistence farming for their livelihood.

God Is Punishing PDP For Its Sins -Bafarawa