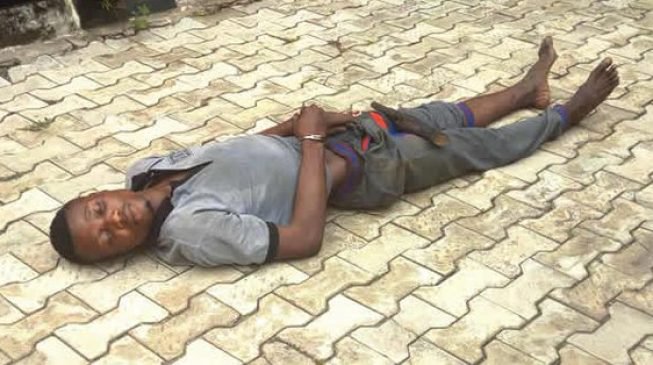 The suspect who took tramadol and became unconscious during a kidnapping operation about 10 days ago has died in police custody.

The suspect, whose identity had yet to be established, was arrested by men of the Ondo State Police Command, after sleeping off on the premises of the victim due to the effect of the tramadol.

The man did not wake up till he passed away on Monday.

The suspect and three other members of his gang were said to have attempted to kidnap a pharmacy owner in Owo town in Ondo State.

However, the operation was not successful as the victim managed to escape.

According to the police, the victim raised the alarm and escaped through the back door of his shop.

The police explained that after failing to kidnap the victim, the deceased had tried to escape on a motorcycle but stumbled while trying to ride the motorcycle.

He was said to have subsequently fallen asleep, while a pack of 400mg of tramadol was found on him by the police.

The other members of the gang reportedly fled.

The Police Public Relations Officer of the state, Mr Femi Joseph, on Tuesday confirmed that the suspect did not wake up until he gave up the ghost.

He said the police suspected that his (deceased) death was not unconnected with the tramadol he had earlier taken.

Joseph said, “I can confirm to you that the suspect is dead. He died last night (Monday). We believe that his death is as a result of the tramadol he had taken before he went for the failed operation.

“We took him to a hospital, where he was given about 30 drips. A medical report indicated that the tramadol he took had damaged his system.

“We are still investigating the matter; our men are on the trail of the fleeing members of his gang.”

2019: APC Chieftains Gang Up Against Akinwunmi Ambode’s Second Term Ambition In Lagos -How They Are Manipulating Tinubu To Field Fresh Candidate