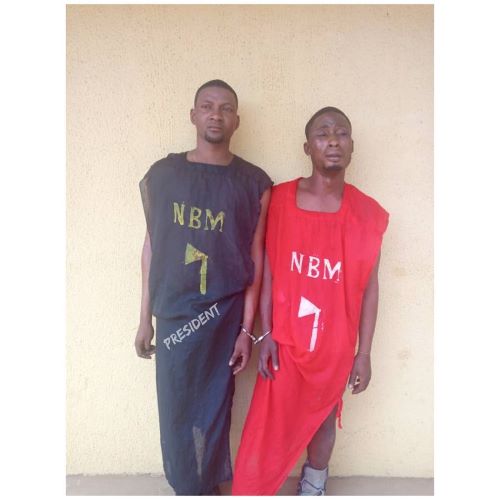 The Students Union President of the Federal Polytechnic, Ilaro, Ogun State, Adegboye Olatunji has denied membership of any secret cult, saying he was charmed and taken for the initiation.

Olatunji was arrested during a cult meeting, putting on the regalia of the secret cult, Neo Black Axe Movement, by the police allegedly following a tip off from the public.

Parading the SUG president and 77 suspected criminals, at the Police headquarters, the state Commissioner of Police, Kenneth Ebrimson disclosed that Olatunji confessed to involvement in cultism, saying “He was apprehended with his regalia and we have refused to let him pull it off so that he doesn’t deny, and you can see it for yourself.”

Speaking with journalists, Olatunji said, “I never confessed any of such thing to him (referring to the Police Commissioner).

“Before I knew what was happening, they have started beating me. What I heard was that ‘I know how to fight on behalf of students that house rent is high,’ that’s what I heard and they tore my clothes, put me inside the boot and took me to school.

“I was going to the church around 7 am on Sunday, I left the school’s hostel. When I was leaving, I greeted the security man and told him that I will be back probably at 3 pm, that my brother called me to come for the service and I want to rush there.

“I sent a message to the choir coordinator of my church that I am going to Judah parish, in llaro, my Rector is also going to that church and he hates anything cultism.”

“They didn’t fight for me because they didn’t make their proper findings. If I was shot dead there, that’s how they will say that the SU president has gone.”

Questioning the other suspect arrested alongside Olatunji, he said, “I am not a cultist, I didn’t see him (SUG President) before we were brought here, I swear to God who made me, I don’t know how I got to the bush.”