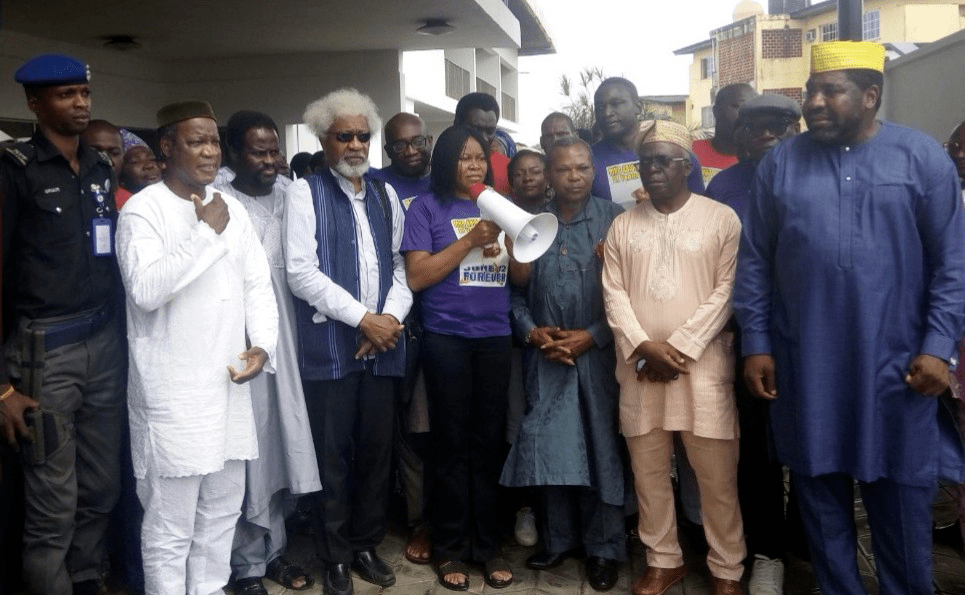 A Nobel Laureate, Wole Soyinka, says closure over the death of Moshood Abiola will be achieved when some of the challenges faced in the country are confronted and eliminated.

Mr Soyinka said this at a Wreath Laying Ceremony to commemorate the 21st anniversary of the death of Mr Abiola, organised by Women Arise for Change Initiative (WA) at MKO Abiola’s graveside in Ikeja.

He was charged for treason in 1994 by the Nigerian government because he had declared himself the lawful President of Nigeria. He died in custody on the verge of being released in 1998.

Mr Soyinka said: “This is the first gathering in honour of MKO Abiola after the formal recognition by the federal government that he was duly elected, and that he is a past president of this nation.

“And all we are waiting for is the formal actualisation through symbolic presence of his photographs among other presidents, even though he was never sworn into office.

“We cannot escape the past, but we can confront the challenges of the present, which of course very often arise from the past.

“We are inching slowly towards closure. One of these days when we gather, we shall be rejoicing.

“At that time, we would have progressed towards the elimination of some of the abnormalities and contradictions in our country.

“We have the issue of security, obeying the law, which is one thing that equalises all. President Muhammadu Buhari should lead by example by obeying the dictates of the law, so that other Nigerians can follow suit.

“It is this refusal to obey the law that has made some sectors of the populace think they are above the law and are causing anarchy in the country.

“We have a responsibility as a people, and government should address the issue of education, youth unemployment and insecurity.

“Just when we thought we were dealing with Boko Haram, then come these nomadic herdsmen armed with AK-47, and gradually, the kind of harmonious relationships that existed between various productive arms of this nation begins to disappear.

“We find ourselves on a daily basis being threatened, killed, our women being raped and other productive arms like farmers being driven off their own territories.

“These are critical issues that we need to deal with head-on and urgently so that we begin to celebrate the memories of Late Abiola and what he stood for,” Mr Soyinka said.

He described late Abiola as a true leader and an icon of inspiration for Nigerians.

“MKO Abiola is one of those that belongs in that galaxy of stellar leaders who at the critical moments said No. Nelson Mandela was one of them, Leah Sharibu is another young example.

“MKO Abiola, when he was given a conditional release in detention, said No. This is an essential lesson,” he said.

Also speaking, a human rights lawyer, Femi Falana, said that a team of lawyers was being set up to re-open the matter on the death of Abiola at the international court so that justice would be served.

Mr Falana decried the high rate of poverty in the county, saying that it contradicted the legacy of Late Abiola.

“We, therefore, need to rededicate ourselves to taking our people out of poverty, tackle the problem of insurgency, banditry and kidnapping by addressing the high rate of out-of-school children.

“Abiola stood for justice for all. All Nigerians must benefit from the resources of the nation,” Mr Falana said.

In his address, retired Admiral Ndubuisi Kanu, a former military administrator of Lagos State, said that Mr Abiola would forever be remembered for his principles and for believing in true federalism.

“We are having so many problems today. 21 years after the death of MKO, we are still struggling to enthrone true federalism where every Nigerian will have a sense of belonging as a citizen.

”We urge the government to go back to how we became a country – a Federal Nigeria. That is the way forward,” he said.

Also speaking, Mohammed Fawehinmi, son of late Gani Fawehinmi, commended President Buhari for being sensitive to the plights of Nigerians.

Joe Okei-Odumakin, the convener of the event, said that 21 years after the death of Mr Abiola, he would continually be celebrated as a great son of Africa.

Mrs Okei-Odumakin urged the federal government to constitute a judicial commission of inquiry to unravel how Mr Abiola died in custody.

She also called for the abolition of poverty in the country, saying that it was an issue important to late Abiola

Responding, Jamiu Abiola, one of the sons of MKO Abiola, appreciated the federal government for declaring June 12 Democracy Day, saying that it was an unexpected miracle.

“I want us to be optimistic as a people because I know that the same federal government that was able to take that giant step will not stop at that. They will respond to the yearnings of Nigerians.

“The many challenges in our country today are as a result of decadence over the years and it will not be easy to tackle them in one day. Let us be patient with President Buhari.

“As we also clamour for restructuring, let us look inward and restore our thinking and ways of doing things. It is not just what the government can do, it is about what we can do as a people to better our nation,” he said.

Also, Abdulmumuni Abiola, another of the sons of late Abiola, urged Nigerians to stop living in the past and plan for a better future for the younger generation.

“We should allow what happened in the past to be in the past. Let’s stop querying who killed Abiola. Let us talk about how to build a better Nigeria for our children.

“This is 21 years after; Abiola has played his part, what we should be talking about is how to play our parts to better our country,” he said. (NAN)

Teenager stabs brother to death over music at wedding party